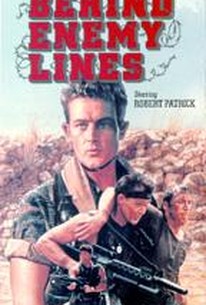 Hal Holbrook stars in this TV pilot film as Colonel Calvin Turner, a special operative for the OSS during World War II. Working in cooperation with British intelligence, Turner's mission is to uncover atomic weapon secrets at a Nazi plant in occupied Norway. The task permits him time for a bit of dalliance with the lovely Anne Twomey. David McCallum and Ray Sharkey costar in this uneven location-filmed adventure caper, first broadcast December 29, 1985.

William Armstrong
as US Army Sergeant

Douglas Lambert
as US Army Major

Critic Reviews for Behind Enemy Lines

...an effort that slowly-but-surely squanders its solid premise and impressive cast...

Audience Reviews for Behind Enemy Lines

There are no featured audience reviews yet. Click the link below to see what others say about Behind Enemy Lines!