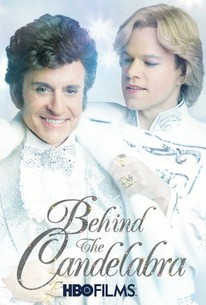 Critics Consensus: Affectionate without sacrificing honesty, Behind the Candelabra couples award-worthy performances from Michael Douglas and Matt Damon with some typically sharp direction from Steven Soderbergh.

Critics Consensus: Affectionate without sacrificing honesty, Behind the Candelabra couples award-worthy performances from Michael Douglas and Matt Damon with some typically sharp direction from Steven Soderbergh.

Critic Consensus: Affectionate without sacrificing honesty, Behind the Candelabra couples award-worthy performances from Michael Douglas and Matt Damon with some typically sharp direction from Steven Soderbergh.

Behind the Candelabra Photos

Before Elvis, before Elton John, Madonna and Lady Gaga, there was Liberace: virtuoso pianist, outrageous entertainer and flamboyant star of stage and television. A name synonymous with showmanship, extravagance and candelabras, he was a world-renowned performer with a flair that endeared him to his audiences and created a loyal fan base spanning his 40-year career. Liberace lived lavishly and embraced a lifestyle of excess both on and off stage. In summer 1977, handsome young stranger Scott Thorson walked into his dressing room and, despite their age difference and seemingly different worlds, the two embarked on a secretive five-year love affair. BEHIND THE CANDELABRA takes a behind-the-scenes look at their tempestuous relationship - from their first meeting backstage at the Las Vegas Hilton to their bitter and public break-up. -- Official Site

News & Interviews for Behind the Candelabra

View All Behind the Candelabra News

Critic Reviews for Behind the Candelabra

Although Behind the Candelabra may be Soderbergh's swan song, it's an uncanny resurrection of the creature that was Liberace.

Yes. It is fabulous. No other word for it, unless that word is "glorious."

Douglas brings a preening, nervous energy to a performance that may well prove to be the best of his career...

Light but not slight, it is ultimately tender and sensationally acted, with both stars giving career-topping turns.

Soderbergh and LaGravenese go deep beneath this voyeuristic fascination with wealth, fame, and the secret lives of celebrities.

As fabulous as it should be and not a jot more or less.

Soderbergh seems most intent on normalizing homosexuality itself, and he does that by zooming straight out to the furthest reaches of stereotype and straining for the banal amongst the golden slippers and snarling houseboys

Behind The Candelabra isn't Soderbergh's flashiest movie, he plays things very 'straight' visually. There are few cinematic flourishes- he knows that the performances are the focus here and he stands back and shoots things so that you are drawn in.

There is not much in Behind the Candelabra that explains Liberace's immense appeal to wide sections of the population, including Soderbergh himself.

The grotesquely gripping performances of Douglas and Damon are wonders to behold here.

Refreshingly frank and undoubtedly entertaining, it doesn't even matter that it follows the general rhythm of many a biopic, as it features two fascinating and unforgettable lead performances.

With Liberace, Michael Douglas straddles the fine line between honouring the obvious effete persona of the famous pianist, without caricaturing him.

Audience Reviews for Behind the Candelabra

Stellar acting by Damon and Douglas, great production design, but the film could easily have clocked in 20 minutes earlier. The ending is quite cheesy, but I'm sure Liberace would have loved it. Still, a pretty entertaining albeit one-sided biopic.

Soderbergh offers a consistent blend of camp and sincerity in this entertaining biopic centered on a complex Liberace amid his fabulous palatial kitsch, with Douglas chewing the scenery in a magnificent performance that surprises for its authenticity and pathos.

The legend, the man, the pianist, Liberace, finally gets his silver screen treatment in this bio pic from director Steven Soderbergh. Starring as the magnificent songbird himself is Michael Douglas, giving one of the absolute best performances of his career. He blends so effortlessly into the role of drug taking, surgery having, mega diva Liberace, that you forget that it's him pretty quickly into the movie. It's just so surprising at first, but then Douglas has been in some risqué faire before. Damon is also surprisingly great in his role as boy toy Scott. Debbie Reynolds even sneaks in a masked performance as Liberace's mother. While going in I knew it was going to be an interesting film, the levels of insecurity, daddy issues, and instability that the relationship between Liberace and employee Thorsen reached constituted a deep set of insecurities that seem unfathomable. The film moves quickly between years and remains quite interesting, until Thorsen's eventual meltdown in the last forty minutes, dragging the rest of the film down with him. It's a story that many don't hear about and should, because it is more scandalous than I could imagine, and that's saying something.

Oh my shame on me, I actually thought this was a parody or spoof comedy about these extravagant Vegas performers like Siegfried and Roy hehe. Turns out this is actually a biopic of the ultra extravagant piano performer Liberace. The film is based on a book/memoir written by the young man Liberace fell for, Scott Thorson, and dissects his close relationship with the homosexual pianist. You may need sunglasses for some sequences within this film...high levels of glitter and sparkle warning!. Spoiler alert (of sorts), if you're uncomfortable with homosexuality on screen then this film might not be for you. I was actually surprised at the level of gritty realism this film portrays, I wasn't expecting it, but sure enough Soderbergh doesn't beat around the bush. In all honesty you can tell straight away its gonna be edgy, the question is can you handle seeing a skinny makeup laden Michael Douglas and a chubby tarted up Damon going at it? oh and there's also a highly gay Scott Bakula looking like one of his 'Quantum Leap' characters...remember that?. I know nothing of Liberace, I grew up when he was still around and big and I do recall seeing him on TV here and there as my folks did like him for his classical skills. After a a little research I was stunned to discover how accurate and well portrayed everyone was in the film. Douglas should be in line for an award of some kind for this performance, its only when you see the real Liberace and then you see Douglas that you realise how damn good he is. Of course he is imitating the man but his mannerisms, body movements/gestures and general overall idiosyncrasies or quirks are brilliantly conveyed. I won't deny it is kinda creepy to watch Douglas at times, his wiry, leathery reptilian-like looks covered in tonnes of glittery makeup whilst clad in some cringeworthy flamboyant attire that a fat Elvis wouldn't say no too...its enough to make you gag at times. Must say he looks terrible with the bald cap on and his aging flabby torso, yikes!. Quick point: I have no idea how they did the live piano sequences but trust me it looks damn good. I'm sure Douglas isn't playing the piano but blimey it looks like he is! very impressive scenes. At the same time Damon is also fantastic in his role and looks just like the real Thorson. I'm unsure if his mannerisms are the same as I found no real footage of the man but he looks the ticket. Again its creepy to watch Damon at times, the lavish makeup, camp behaviour, full blown kissing and tight sparkly revealing underwear...its all very errrm...homosexual. Not that that's a bad thing of course, its just an extreme eye opener to see these two fellas going at it and acting this way. I did enjoy seeing how Liberace carried on I must admit, to see his previous bit of fluff whom he gets rid of for Damon's character. The way the previous bit of fluff knew exactly how Liberace behaved because he'd seen it all before and knew his time was up, he was old hat. I liked the rather camp house boy Liberace had around the mansion and the fact he knew about Liberace's devious ways, Dan Aykroyd's rather blunt and gruff manager character and a round of applause to Rob Lowe as the seedy slimy plastic surgeon/drug dealer. 'Hey Scott, why don't you stay outta my f**kin business, now give me back to Lee' The level of narcissism shown by Liberace to actually have Thorson's face altered to look more like his own was pretty eerie really. The fact that Thorson agreed and the way everybody carries on about it in the film is like a car crash, you just can't look away!. Its in these sequences where Lowe really shines plus it shows us the indulgence and vanity shown by all involved. Yet despite that you do feel Liberace cared very much for Thorson, there was true love there. Unfortunately being involved in show business meant real feelings could get smothered very easily with egocentric behaviour...as displayed by Thorson at the end. I think lavish and flamboyant are the key words here, everything about the film (and this man's life) is just that. The sets are tremendously well created and really show how this man lived, more eye openers folks!. All the costumes and props seem to have been recreated to the tiniest detail, not only that but sequences from his real shows appear to have been recreated too. If you check some of Liberace's You-Tube clips out you'll see how pinpoint these sequences have been made, I really can't falter anyone involved with this production. The story is very familiar really, it could be any relationship between any two people male and female, a simple tale of mistrust, lying, promiscuity and wealth. Towards the end the film does become quite sad in all honesty, you do come to like Liberace and his squeaky tones, you know Thorson did care about him deep down and at the very end the gifted performer is given a nice send off and rightly so. You can see what will happen a mile away its very easy to predict all the way through, but the ride to get there is undeniably a show stopper.

Behind the Candelabra Quotes