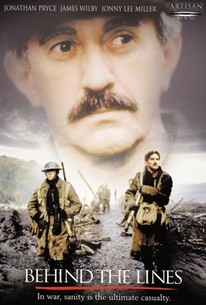 Behind the Lines Photos

This period drama was based on the Booker Prize-winning novel by author Pat Barker, one of a trilogy dealing with World War I. James Wilby stars as Siegfried Sassoon, the real-life war hero and poet who, in 1917, writes a statement against the war that is read in Parliament. Faced with the choice of either a court-martial or time in a mental hospital as a result, Sassoon chooses the hospital, and is sent to Craiglockart, a Scottish castle where shell-shocked vets are being treated by Freudian therapist Dr. William Rivers (Jonathan Pryce). Sassoon soon befriends a pair of fellow inmates. One, Billy Prior (Jonny Lee Miller) is suffering from battlefield trauma. The other is shy young fan and fellow poet Wilfred Owen (Stuart Bunce), whose own anti-war writings, encouraged by Sassoon, will go on to make him posthumously famous as well. In the meanwhile, the once-zealous Dr. Rivers begins to question his role of mending patients' minds so that they may simply go back to the front lines. ~ Karl Williams, Rovi

Jonny Lee Miller
as Billy Prior

Critic Reviews for Behind the Lines

Although the stories in the film are moving, director Gillies MacKinnon is never able to weave them into a compelling whole.

Audience Reviews for Behind the Lines

Behind the Lines aka : Regeneration . This Movie is from the 1997 Toronto Film Festival. Its a war movie that shows how bad conditions were in World War I, and what the soldiers had to go thru back in hospitals to get straighten out. Main character in this one is a poet who is an officer who in the end goes back to front lines. Its Ok not one of the best from the film festival. 3 1/2 stars best I can do.

Behind the Lines Quotes