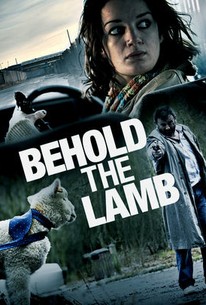 Two strangers team up for a road trip with unexpected consequences in this offbeat comedy from Ireland. Liz (Aoife Duffin) is a twenty-something woman trying to put her life back in order after kicking drugs and giving up her career as a hooker. Liz has a handicapped son who is in foster care, and en route to a visit with her boy, she gets roped into giving a ride to Eddie (Nigel O'Neill), a middle aged slob with little to lose but his waistline. Before long, Liz discovers she's tangled up in a drug smuggling scheme that involves a nervous sheep, though on the bright side, Eddie's hobby as a birdwatcher gives them the opportunity to appreciate the highly unusual avian life they encounter along the way. Behold The Lamb was the first feature film from writer and director John McIlduff.

Critic Reviews for Behold The Lamb

There are no critic reviews yet for Behold The Lamb. Keep checking Rotten Tomatoes for updates!

Audience Reviews for Behold The Lamb

There are no featured audience reviews yet. Click the link below to see what others say about Behold The Lamb!