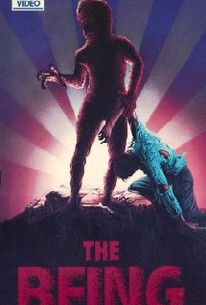 Director Jackie Kong, who later made the cult favorite Blood Diner (1987), directed this terrible monster movie for exploitation pioneer Bill Osco, who stars under the pseudonym "Rexx Coltrane." The plot concerns a mutant child who has become a monster after being exposed to toxic waste in a small Idaho town. Mortimer (Osco) wants to investigate a series of disappearances, only to have his efforts stymied by the town's mayor (José Ferrer), who is worried about the potential economic impact on the local potato industry. This abysmal horror film was made in 1980 and shelved for three years despite a cast which includes Oscar winners Ferrer and Dorothy Malone, Martin Landau, and Kinky Friedman. Other featured performers are Ruth Buzzi, Murray Langston ("The Unknown Comic"), and Kenny Rogers' wife (at the time), Marianne Gordon.

Dave Clark
as Customer In Diner

Critic Reviews for The Being

Grungy, muddy-looking, and completely beholden to Alien for all its money moments, The Being is Z-grade schlock-slinging at its most obvious.

Audience Reviews for The Being

There are no featured audience reviews yet. Click the link below to see what others say about The Being!