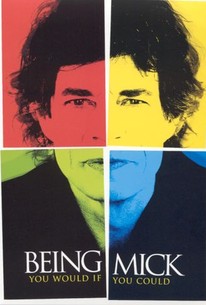 Originally aired on ABC television, this hour-long documentary offers a glimpse into the personal life of the inimitable, always outspoken frontman of the Rolling Stones, Mick Jagger. Oscar-winning documentarian Kevin Macdonald (One Day in September) took cameras behind closed doors with the rock star for nearly a year -- sometimes turning over the camera to the man himself -- culling the footage into an intimate, economical portrait that encompasses both his personal and professional life, both in the studio and with his family. Among the rock luminaries who make guest appearances are Bono, Lenny Kravitz, and Pete Townshend. Released by Jagger's movie and TV production shingle Jagged Films, Being Mick first ran on TV on November 22, 2001, not coincidentally the same week that Jagger's solo record Goddess in the Doorway was released.

Critic Reviews for Being Mick

If ever there was a rock star's crib that deserved its own documentary, [Jagger's] is the one.

Audience Reviews for Being Mick

There are no featured audience reviews yet. Click the link below to see what others say about Being Mick!