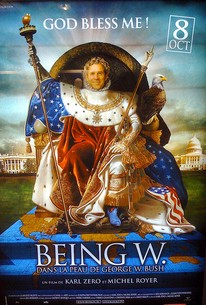 On the heels of their 2006 satire Being Jacques Chirac, French satirists Karl Zero and Michel Royer use those same techniques used to poke fun at their own president to mock former American President George W. Bush. From his privileged upbringing to his rise to power, and later status as Commander in Chief, Bush reflects back on his life though a candid, fictional inner monologue. No failed endeavor, personal or professional, is off limits as Zero and Royer poke fun at everything from Bush's embarrassing business endeavors to his discovery of religion and his continued efforts to master the English language. Later, as the subject turns to the Iraq War, the hanging of Saddam Hussein, and the horrors of Abu Ghriab, the tone plunges from playful to serious just as fast as the president's public approval rating plunged during his final months in office. ~ Jason Buchanan, Rovi

Critic Reviews for Being W

There are no critic reviews yet for Being W. Keep checking Rotten Tomatoes for updates!

There are no featured reviews for Being W at this time.