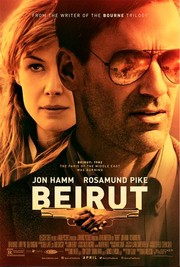 Robin E
½ January 19, 2019
The everlasting charm of Jon Hamm successfully elevate Beirut, even though some part of the movie might be too slow.

Bob K
December 18, 2018
My second Rosamund Pike in the Middle East movie this month, and fortunately, this one is quite good.. John Hamm is so watchable, even as he sinks into alcoholism and despair. He's given a redemptive mission, with great reluctance, and his old guile leaps back into action so that he can negotiate for the return of his former colleague from the PLO. There may be too much everyone-is-to-blame for the collapse of the city into chaos, and I would have preferred some additional background material (the kind most critics hate, calling it "confusing") about the Lebanese civil war. But what you do get here is very well done.

Jerod S
½ December 17, 2018
Maybe my attention span was a little rusty the day i watched this one - but i wasn't compelled to track with Jon Hamm trying to get this CIA guy out...

David L
½ November 16, 2018
excellent thriller starring Jon Hamm & Rosamund Pike (and a surprise with-toupee Dean Norris) where you are never quite sure who's playing who and why until things escalate to a boiling point. Nicely done !

November 5, 2018
as a lebanese i understand why the audience gave this movie an average rating, probably because they didn't quite understand the history of the lebanese civil war and its effects on our society. and even tho this movie wasn't filmed in lebanon (beirut),i do believe that their representation of beirut in the 1970s and 1980s was very accurate.

Chris H
½ November 3, 2018
I have watched a lot of middle eastern political thrillers and this probably sits right in the middle of the pack. It is well made and tells an interesting story but the story is so familiar and nothing new is really mined from this. Still it was an enjoyable film in a genre that i like.

Julian K
½ October 16, 2018
Beirut: 7 out of 10: A washed-up professional negotiator (John Hamm) returns to Beirut to rescue a former friend whom he blames for the destruction of his family.

The Good: Well they certainly captured the look and feel of early eighties Beirut. This is a ridiculously handsome production with nary a misstep in production design. The film decorates Tangier with enough extras and burnt out tanks to give the perfect representation. A true spectacle.

Everyone is solid to good in his or her roles. John Hamm does a fine job considering the issues with his character (see below) and Rosamund Pike shows once again why serious filmmakers put her in their movies.

The overall plot of forgiveness and closure with the past is well thought out. For the first half of the movie, this is a very tight drama told in a very convincing manner.

The Bad: Tony Gilroy's script gives a great opening and floor show but simply cannot stick the landing. The latter third of the film simply seems rushed. Where character development should be paying off and emotions taking the foreground we have deus ex machina piling upon deus ex machina. Last minute revelations undermine the carefully crafted plot while characters pull the negotiation version of a superweapon from thin air to fill obvious plot holes. The movie wants a happy ending the story (and location) certainly does not deserve.

In addition, we have the problem with John Hamm's character. We are told he is a self-destructive alcoholic and an expert negotiator. We are told this over and over again. We are not really shown this, however. While Hamm's character is certainly gregarious, at no time in the movie does he seem to do a good job negotiating. In fact, considering the cards he is holding, by any honest measurement he is pretty awful at his job

Even stranger Gilroy's script plays that old convention drunk guy sobers up for the big task. He has set back and oh no he is going for the bottle again. Watch the audience shriek in horror as they yell at the screen "No don't do it" as he pours another whiskey. In reality, self-destructive alcoholics are not triggered to drink when things go badly. They are triggered to drink when things go well. The whole will he drink thing seems more hamfisted audience manipulation than actual actions by the character.

The Ugly: The film ends with a completely unnecessary credits clip about the actual US involvement in Beirut in the early eighties. In a few minutes, the clips manage to downplay a real tragedy (The marine barracks bombing in 1983 that killed 241 U.S. and 58 French peacekeepers), skip the incident the movie is obviously based on (The kidnapping and murder of CIA station chief William Francis Buckley in 1985), and generally undercut the artistry that came before it as well as insult the audience watching.

In Conclusion: Despite the ending, as well as some issues with the focus on plot over character, I enjoyed this movie. I cannot overemphasize how handsome a production this is. The film really manages to take you a different time and place. As a setting early eighties Beirut is a fantastic one. There is a great fall of civilization/ Mad Max vibe that permeates every scene. The film does a nice job during quiet moments to capture the horrible destruction and the human nature of those still occupying the city going about their daily lives. There are wonderful stories that can be told in such chaos. This story was just a little less wonderful than it needed to be.

Erin L
September 20, 2018
I loved this film. Wow, Jon Hamm is AMAZING! What a great role for him. The story was interesting and face paced

Tom M
September 8, 2018
I'm surprised I haven't heard of this movie! It's a pretty good film. The down side is there is nothing new here, really. It's your typical CIA type film in the Middle East with terrorists, kidnap for ransom & some explosions. Other than that, if you've seen one, you've seen them all. If you're looking for a weekend flick and nothing else is on or can't find a decent flick to watch, give this one a try...

J P
August 29, 2018
If you want to watch a movie with a well characterized 80's flair, then go for this movie. Besides, the acting overall is pretty good, especially when it comes to Jon Hamm's performance.

August 27, 2018
Fairly ok watch for filling an afternoon of doing nothing. It's no Spy Game though.

Louisa M
½ August 22, 2018
War-torn Lebanon in the early 1980s sets the scene for "Beirut," the talky espionage thriller from director Brad Anderson ("Transsiberian," "The Machinist") and writer Tony Gilroy ("The Bourne Identity," "Michael Clayton" ). The film is an intelligent and gripping political tale that sometimes feels far too familiar yet remains fully engrossing from beginning to end.

Jon Hamm plays Mason Skiles, an accomplished U.S. diplomat who leaves Beirut in the 1970s after a tragic accident. A decade later, Mason is summoned back to Lebanon by the CIA to aid in a rescue mission after a high ranking agent (and one who is full of dark secrets) is taken hostage. Mason is assigned a field agent "skirt" (Rosamund Pike) to keep him alive and ensure his objective is a success.

Nothing is what it seems as the agents and suits distract and outplay each other in a cat and mouse game of wits. A growing number of unanswered questions soon makes it clear that greater conspiracies and coverups may be in play.

The film's biggest strength is its top shelf screenplay and tight plot; there isn't much fat that pads Gilroy's script. It's a smartly written, taut tale of international intrigue that becomes immensely satisfying when paired with Anderson's effortless direction and all-around competent performances from the cast (including supporting actors Dean Norris, Mark Pellegrino, and Shea Whigham).

What's lacking is a frank discussion of historical accuracy and fully developed, complex characters. It's also a little too dry and long-winded at times with an abundance of lengthy expository monologues.

"Beirut" feels like a throwback to old school political thrillers of the past and delivers little fresh or trendy by way of its story line. Still, this is a smart and compelling film that will satisfy finicky art house audiences.

Joshua B
August 21, 2018
Uninteresting kidnap flick. Brings nothing new to the table. I don't understand how this got such a high score. Mediocre at best.

Naji T
½ August 16, 2018
Somehow i don't recognize my own country. Beirut is among the most beautiful cities worldwide, what did you do to the original scene? Always trying to show that the middle east is chaotic and bad. And it is funny that America was after most of the wars.
Page 1 of 6