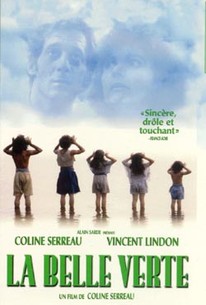 As part of an intergalactic coalition, a well-meaning space alien volunteers to bring a message of self-actualization and harmony with nature to the one planet rejected by all her peers as incorrigible--Earth. This family-oriented French sci-fi comedy chronicles her adventures on the chaotic planet. Mila is 150 years old and has five children; encoded in her brain are two telepathic programs designed to restructure the thinking of destructive humans. The first is a fairly mild program designed to inspire the humans to rethink their world and begin asking some difficult questions. The other is far stronger and rapidly indoctrinates subjects with lofty utopian ideals and makes them deeply aware of themselves. Mila lands in Paris and is unnoticed but for the sudden, inexplicable power surges and outages that occur whenever she sends a telepathic message to her alien cohorts. Instead of eating, Mila draws energy from holding newborn babies. It is while holding an orphan infant in an obstetrics ward that her Earthly troubles begin. Feeling deeply for the baby's plight, she confronts the ward's head doctor and when logic fails, looses her programs upon him. Instantly the unsympathetic brute sees the light and begins helping her save the babe from wicked welfare workers. ~ Sandra Brennan, Rovi

There are no critic reviews yet for La Belle verte. Keep checking Rotten Tomatoes for updates!

There are no featured reviews for La Belle verte at this time.