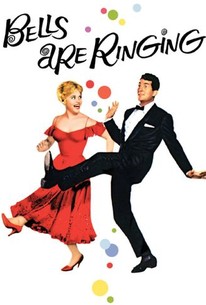 This musical comedy is the film version of the hit Broadway play. Starring Judy Holliday and Dean Martin, Bells Are Ringing scored with a few hit songs, most notably the moody finale "The Party's Over." The screenplay was done by Betty Comden and Adolph Green who also wrote the play, and was directed by Vincent Minnelli.

Critic Reviews for Bells Are Ringing

Vincente Minnelli makes use of the wide screen with graceful, fluid movement, and he helps Martin anchor his usual breeziness with just the right amount of anxiety.

Never translates into anything cinematic.

The offbeat charm, comic sense and assorted show-business talents of Judy Holliday constitute the prime reason why Hollywood's edition of the Broadway musical is well worth seeing.

With plenty of memorable musical numbers, fun characters and a zany plot with a satisfying ending, Bells Are Ringing (1960) is sure to please.

Has too much plot and not enough music or comedy.

Minnelli's last collaboration with Arthur Freed is an old-fashioned, moderately entertaining musical that suffers from lack of chemistry between Judy Holliday and Dean Martin.

One of Hollywood's last old-fashioned Broadway adaptations, with Holliday as endearing as ever. Not exactly Minnelli's finest, but well worth catching for musicals fans.

One of the most undervalued of musicals.

Audience Reviews for Bells Are Ringing

Sweet, good natured comedy. Wonderful supporting cast but the shining light of the whole thing is Judy Holliday a truly unique talent. She glows when ever she's on screen. Sadly this was her last film. A real loss.

I really liked Holliday in this movie, her last, it's fun and has good songs. The story is funny and romantic, and I recommend this movie.

Moments of genius, moments of complete stupidity. Judy Holliday was fantastic, but I found the film real uneven. I bet on stage it would work a lot better. The police story line was especially cringe inducing. However there was great physical comedy shtick

Judy Holliday is a an absolute delight in her final film as a telephone answering service operator who becomes romantically involved with one of her clients. Stylish musical based on the 1956 Broadway hit of the same name is heartwarming and sweet from start to finish. An undervalued gem. Songs include the popular standards "Just in Time" and "The Party's Over".