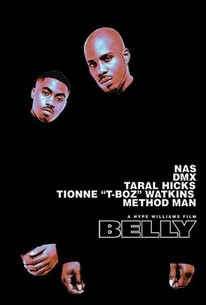 Music video director Hype Williams made his feature film debut with this visually inventive urban drama. Tommy Brown (DMX) and his friend Sincere (Nas) are gangsters who have learned how to make a good living by dealing drugs and pulling armed robberies. Tommy and Sincere have been able to move out of the ghetto in Queens where they were raised and relocate to an upscale section of Manhattan; they would seem to have it made, but both realize that their lives are headed toward a dead end. Sincere begins getting in touch with his African roots and tries to convince his girlfriend Tionne (Tionne "T-Boz" Watkins) that they should emigrate to the Motherland, while Tommy has a religious awakening and joins the Nation of Islam. Along with top-selling rappers DMX and Nas, hip-hop artist Method Man and R&B singer Taral Hicks also appear. ~ Mark Deming, Rovi

Prince 'Blunt' Graham
as Thug No. 2

Wondosas 'Kilo' Martin
as Thug No. 3

Michael Manning
as Teacher
View All

That opening scene bumps it up. I forgot, upon rewatching, how great the opening is and how terrible everything after is. Should've just been a music video...

If we're not talking about the opening...this is pure insanity. Have you actually watched this movie?

On paper, Belly is just another boilerplate crime drama about how a life of street crime can only end one way... In its execution lies perhaps one of the greatest displays of style as substance in contemporary cinema.

All style and very little substance in this oft-told tale of inner-city angst.

All of Williams's glitz, delicious eye candy as it is, eventually overshadows his own script.

Make no mistake: Style is paramount in Belly, a flashy, trashy look at the gangsta' life, which Hype Williams has exploited in videos for Puff Daddy, Mase, Tupac Shakur...

I like Nas and DMX... I think DMX in particular is a pretty decent actor given the roles he's been dealt. But "Belly" is complete garbage. What I find most shocking is that numerous people I know cite this as one of their favorite films! That's the only reason I even decided to see this to begin with (it was forced on me) and hated just about every minute of it. Terrible.

Think Nas "Hate Me Now" Music Video on the Big Screen mixed in with a plot about drugs. Smooth visuals but given the director, pretty much a music video without the dubbing. Great Soundtrack, opening scene best part.

fantastic, nas should do more serious acting, he was great. this film really helps to show the mind set of someone who cant get out of their own way, and it has a great message of redemption at the end.