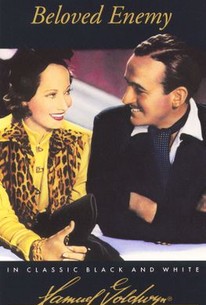 This lavishly appointed Sam Goldwyn soap opera is set in Ireland during "the troubles." Irish rebel leader Dennis Reardon (Brian Aherne) falls in love with Lady Helen Drummond (Merle Oberon), the aristocratic daughter of British diplomat Lord Athleigh (Henry Stephenson). Reardon's underground associates, not so romantically inclined, assume that their leader has sold out to the enemy, when in fact he is working tirelessly for an honorable and equitable end to the hostilities. His best friend O'Rourke (Jerome Cowan) is given the job of assassinating Reardon, leading to a tragic climax more suited to an Italian opera than an Irish political meller. Beloved Enemy was very loosely based on the exploits of Irish patriot Michael Collins, who of course was the subject of the far more accurate 1996 biopic starring Liam Neeson and Julia Roberts.

Wally Maher
as Humphries
View All

Its weakness seems to be that it has too many elements and too many points of view, that it tends to mount its horse and ride off in all directions.

There are no featured reviews for Beloved Enemy at this time.