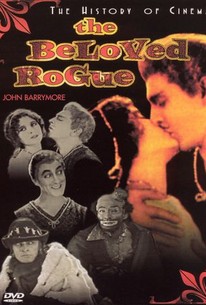 Beloved Rogue stars John Barrymore as legendary Parisian poet/vagabond Francois Villon. The film follows the basic chronology of all Villon dramatizations (If I Were King, The Vagabond King etc.): To ensure the loyalty of his subjects, crotchety King Louis XI (Conrad Veidt) appoints the waggish Villon king for one day. This proves to be a blessing when Villon rouses the thieves, tramps, trollops and other assorted Parisian lowlifes to defend the walled city against the invading Burgundians. Marceline Day, Mack Swain and Slim Summerville also star.

Lawson Butt
as Duke of Burgundy

Jane Winton
as The Abbess

Bertram Grassby
as Duke of Orleans

Critic Reviews for The Beloved Rogue

[Barrymore] throws himself into the swashbuckling scenes, leaping across roofs less like an action hero than a child of the streets who hasn't quite grown up...

Audience Reviews for The Beloved Rogue

The place, Paris. The time, the 15th century. An introductory title card says that the time of Joan of Arc is past and France is still trying to maintain its independence from various supplanters. We are shown François as a baby. In comic manner it is suggested that he had a love of wine as a young man because he was bottle-fed a mixture of milk and wine from the beginning of his life. Then we jump ahead some twenty-five years. François Villon is shown having some shenanigans with his two best friends, Jehan (Summerville) and Nicholas (Swain). Like in The Hunchback of Notre Dame, the Festival of Fools and the Court of Miracles are portrayed. Barrymore as Villon clowns around as the king of fools. Everyone knows him to be a clever poet and he loves his fellow poor people of Paris. He gets mixed up in some political posturing however. The Duke of Burgundy and Thibault want to take over France. The Duke hopes to marry Thibault to King Louis XI's ward Charlotte de Vauxcelles. Conrad Veidt of The Cabinet of Dr. Caligari is the superstitious, indecisive, and easily manipulated King. He does turn out to be a bit more sympathetic than he appears at first, since Villon remains loyal to the King for some foolish reason. The uppity Charlotte is played by Marceline Day. Of course she rebels against the arranged marriage, escapes by rooftop with our hero, is trapped in a high tower for a time, and reluctantly realizes she loves the rogue Villon. The costumes and scenery take you to Medieval Europe. The performances are strong with Barrymore showing a wide spectrum of emotions.