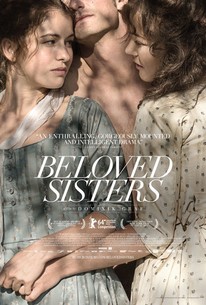 Beloved Sisters depicts the unconventional romance between two aristocratic sisters and a rebellious poet who took the European literary world by storm in the late eighteenth century. As the German Enlightenment flourishes in Weimar, vibrant Caroline von Beulwitz (Hannah Herszsprung) finds herself in an unhappy marriage to provide for her mother and shy younger sister Charlotte von Lengefeld (Henriette Confurius). When both sisters fall for outspoken writer Friedrich Schiller (Florian Stetter), their desire ignites a journey of shared passion and creativity. Charlotte and Schiller marry so that the lovers may pursue their ménage à trois under the guise of convention, but as Caroline reveals herself to be a talented author in her own right, the trio's fragile equilibrium is threatened and the sisters' once unbreakable connection is irrevocably changed. In this sweeping yet intimate romantic drama, which is also Germany's official submission to the Academy Awards for Best Foreign Language Film, acclaimed director Dominik Graf illuminates the lives of two bold young women and one of classical literature's most celebrated figures with charm and contemporary energy. (C) Music Box Films

Elisabeth Wasserscheid
as Schwenke
View All

It's epic stuff, and at 170 minutes it's a commitment. Schiller seems to be blazing a trail for German über-confidence, seeing his modern man as the grand product of all that's been right with history.

If nothing else, "Beloved Sisters" is one of the most visually striking biopics around. Too bad you have to wade through so much verbiage in order to enjoy it.

Without at least the tawdry pleasure of a little bodice ripping, the film moves along sluggishly, even though it is well acted and handsomely shot.

When an occasional blast of purple dialogue is triggered (such as ''Save me from my passion!''), it only makes you wish for the unintellectual bodice ripper that the movie should have been.

"Beloved Sisters" might scratch your costume drama itch, but it's not among the genre's best.

If more historical movies were like Beloved Sisters, the term "costume drama" would be less of an insult.

...engaging and even arty enough to satisfy.

It's a respectable, luxurious production that moves quickly for its length, but never quite brings to life a time in history of enormous social and political upheavals that may seem distant to many viewers.

The question of whether Dominic Graf's costume drama romance Beloved Sisters needs to be three hours long is an academic one on many levels.

The premise of Beloved Sisters is alluring and entertaining. The cast is gorgeous, as is the cinematography and painterly tableaux... However, Graf does Schiller, his contemporaries, and the events of the time a disservice.

It's a fascinating story, and as he explores the giddiness and disillusionment of this peculiar love triangle, filmmaker Dominik Graf gives us something peculiar: a history lesson disguised as a soap opera.

There are no featured audience reviews yet. Click the link below to see what others say about Beloved Sisters!