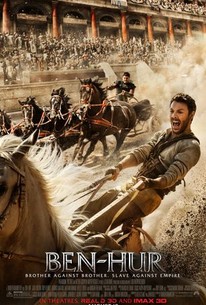 Critics Consensus: How do you fight an idea? By filming a remake that has too few of its own, and tries to cover it up with choppy editing and CGI.

Critics Consensus: How do you fight an idea? By filming a remake that has too few of its own, and tries to cover it up with choppy editing and CGI.

Critic Consensus: How do you fight an idea? By filming a remake that has too few of its own, and tries to cover it up with choppy editing and CGI.

The epic story of Judah Ben-Hur, a prince falsely accused of treason by his adopted brother Messala, an officer in the Roman army. Stripped of his title, separated from his family and the woman he loves, Judah is forced into slavery. After years at sea, Judah returns to his homeland to seek revenge, but an encounter with Jesus leads him to the Crucifixion, where he discovers forgiveness and finds redemption.

The movie isn't really saying anything, and is just cruising on the fumes left over from our associations with a classic.

Ben-Hur isn't the worst film of the year, but from a technical standpoint it certainly looks it.

Very rarely does it try to impress us, or overwhelm us, shock us, move us.

Somehow, Ben-Hur 2016 feels longer and duller than its predecessor.

What's wrong with the new Ben-Hur? How long have you got? This is a textbook case, step by agonising step, of how not to make a big-budget blockbuster.

The decision to film the major set-pieces in extreme close-up was ill-advised, and these murky and incoherent bits are further crippled by obvious CGI as well as rapid-fire editing that recalls those Ginsu blades in action on late-night infomercials.

Remaking the classic Hollywood epic and 11-time Oscar winner Ben-Hur seems redundant - so 2016's Ben-Hur starts on the back foot.

It glosses over familiar scenes and motifs, going through the same old routine without bringing anything new to the table.

For a movie that wants so badly to be epic-regular swooping helicopter shots of long lines of people walking along some ridge or cliff pepper the film-Ben-Hur lacks any sense of majesty or grandeur.

Unfortunately, 'new interpretation' means changing the story dramatically and turning it into a slight rip off of Gladiator and we are not entertained.

A spectacle worthy of Cecil B. DeMille but with a story that is more grounded and layered with softer, nuanced, more human emotional performances that go beyond the visual (and visceral) experience.

Debbie Lynn Elias
Behind The Lens
View All Critic Reviews (191)

A new interpretation of the classic Lew Wallace novel, Ben-Hur is a thrilling epic tale of adventure. Two adopted brothers become bitter rivals when one joins the Roman army and is tasked with rooting out rebels in Jerusalem, leading him to sentence his brother to the life of a slave when he's discovered to have harbored a would-be rebel assassin. The performances are pretty good and the production values are extraordinarily well-done, creating an authentic look and feel for the time period. The special effects in particular do an incredible job at creating dynamic action sequences; such as the naval battles and chariot races. But the writing falls short and doesn't take the time to develop the characters or the story all that well. Yet despite its shortcomings, Ben-Hur is an entertaining film with a powerful message about forgiveness and letting go of hate.

Ben-Hur epitomizes the ill-advised remake that no wanted to see and no wanted to make. It was, truth be told, a film that I looked forward to eviscerating -- an example of Hollywood gone wrong with big budget filmmaking, relying more upon name recognition than actual content or inspiration. And I was completely wrong, as Ben-Hur proves a more solid retelling than anyone anticipated or even deserved. It is spectacular or even great? No. Ben-Hur 2016 wanders into generic modern remake territory occasionally, but what it does it does well. In fact, it sports advantages over its predecessors whether it's the 1886 novel by Lew Wallace, the original 1925 silent film, or the classic and beloved 1959 movie directed by William Wyler. (I am familiar with all of these by the way.) The narrative framework revolves almost entirely upon the friendship and rivalry between Judah Ben-Hur and Messala. In fact, where in previous versions Messala turns into a cartoonish villain as the story progresses, here he remains sympathetic throughout and shares near equal screen time with the protagonist. Furthermore, whereas the galley/naval battle scene was done better in 1959, this version's chariot race may actually end up being my favorite for being incredibly brutal and raising the stakes even higher for its protagonist. Though, I absolutely love how this movie essentially slaps both Ben-Hur and Messala for pursuing a path of egotistical vengeance hung up in macho pride. Lastly, the heavy-handed religious parable that defined the final act of the 1959 version has been toned down in favor of a condensed version that emphasizes the passion story more in terms of personal redemption for our two main leads than the usual religious messaging. Now to where it falls short. William Wyler's 1959 classic sported one of the greatest musical scores of all time. Put it this way - no one is winning an Oscar for best original score here. As said before, much of the film can fall into generic blandness as times, but more troubling is the fact that so much effort goes into the primary relationship of the film, that no other relationship or performance stands out. It also lacks the grandeur of its immediate predecessor, but I suspect that may be intentional, as this is supposed to be a more realistic and grounded approach to the same story we all know. The artistic feat of not showing Christ's face is gone now, with the usual Jesus cameos to keep Ben-Hur hydrated and honest. Oh and Morgan Freeman is so out of place in this movie. He gives it his all, but his dreadlocks prove distracting and his modern affectations are jarring. So is it worth your time? To many this may appear to be attempt to cash in on the faith-based film craze that has happened in recent years and may turn off potential audiences. This is not really the case, and while religious viewers are not turned away, this is more for general audiences. It obviously doesn't compare in quality to what came before, but it does have enough merit to stand on its own and is worth a screening. In fact I view it as an interesting alternate universe take, considering the GIGANTIC twist it plays in the third act. It's a shame that it was saddled with an obnoxious budget and unrealistic expectations. It may prove to be successful overseas and become a cult hit - the John Carter of 2016 if you will. But that's just speculation. So yes give Ben-Hur: A Tale of the Two Brothers a shot. It needs the chance.

Despite some standout set pieces, this unoriginal and uninspiring take on Ben-Hur goes round in circles as if chasing its tail, seemingly remaking the 1959 William Wyler epic rather than adapting Lew Wallace's classic Christian novel in its own voice. When Morgan Freeman gets tapped to provide the by-now-clichéd Wise Man narration as he's done for countless other H'Wood productions, you know that a film isn't exactly striving for creativity. Here, the team that brought the hit cable docudramas The Bible and A.D.: The Bible Continues to the small screen, producers Mark Burnett (CBS's Survivor) and Roma Downey (CBS's Touched by an Angel), buffer up the same safe, cut-and-dry, and speed-resistant sheen that they gave to Son of God, a children's Bible story marketed as an adult drama where Jesus Christ looked and walked like a Tom Ford model. Sure, blood and guts spillage gets teased, but it's all a sleight of hand. Very little of this film feels real, in fact, as so much CGI gets used to finish off shots and render people that the software engineers should be eligible for their S.A.G. and Director's Guild cards. If this techno trickery at least struck a unique chord, some of these transgressions could be forgiven. In a recent article for Variety, the producers even promised that this version will be different from the Oscar-winning classic starring Charlton Heston, but the 2016 re-do definitely plays out like a pale imitation. Even the one improvement on the 1959 version - economy - often acts as a deficit. Sure, the new model clocks in at nearly two hours less than its forebear but at the cost of decent storytelling. Some choppy editing makes for some awkward and abrupt transitions. In this PG-13-rated religious drama, a wealthy Jewish merchant and prince (Huston) gets falsely accused of treason by his adopted brother (Kebbell), so he returns to his homeland to seek revenge, but finds redemption instead. Certainly, the production had potential (not just the faith-based filmgoers who made Miracles from Heaven a hit either). This novel once outsold Gone with the Wind and the producers took great pains to make everything but the running time epic (the budget is reportedly in the neighborhood of $100 million and the cast and crew prove somewhat star-studded in comparison with, say, Son of God). Aside from an exhilarating galleon and chariot battle (again, mirrors to Wyler's classic and augmented by too much CGI) and a game cast, Ben-Hur comes off as redundant and underwhelming a Biblical epic as Noah and Exodus: Gods and Kings-themselves pale imitations. Bottom line: Chariots of Misfire