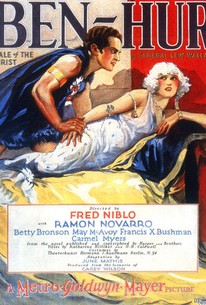 Ben-Hur: A Tale of the Christ Photos

This renowned silent epic was one of the most expensive features of its day, and easily stands up to the later, technically superior version. Juda Ben-Hur, a Judean Prince forced to become a galley slave, saves the life of a Roman nobleman. He is adopted by the Roman and becomes a respected citizen and a famed chariot racer. Upon his return to Judea, Ben-Hur witnesses the crucifixion of Jesus and is inspired to convert to Christianity. Hold on tight during the sea battle and chariot race.

May McAvoy
as Esther

Claire McDowell
as Princess of Hur

Harry Greenberg
as Centurion
View All

News & Interviews for Ben-Hur: A Tale of the Christ

13 Barrier-Breaking Hispanic Stars and Their Most Celebrated Roles

View All Ben-Hur: A Tale of the Christ News

Critic Reviews for Ben-Hur: A Tale of the Christ

Ramon Novarro, who plays the part of Ben-Hur, is a sturdy, handsome young chap, with an excellent figure. His performance is all that one could wish, for he is fervent and earnest throughout.

Ben Hur is a picture for all times. No matter what happens to others, Ben Hur will remain, as the Bible remains.

The part of Ben Hur Is magnificently played by Ramon Navarro. In his hands the character shows a gradual and logical development, beginning with Judah's boyish bearing in the streets of Jerusalem, adopting a harder tone [as the film progresses].

There have been few attempts made to adapt masterpieces of history to the screen; very few of these attempts have been adequate. This cannot be said of Ben Hur.

The strangest thing:about a deliberately spectacular film is that, when'it i most spectacular, it ceases altogether to be personally dramatic.

At nearly 2½ hours long, the 1925 version is still an hour shorter than the 1959 version, yet the story is essentially the same, and the scale similarly impressive.

As a spectacle, a tremendous pictorial achievement, a truly Immense conception of the unlimltatlons of the motion picture camera, I can for comparison with the film... only hazy recollections of D. W. Griffith's Intolerance.

This is a truly great picture. No one, no matter what his age or religion, should miss it. And take the children.

It is an amazing production. If only for the chariot race alone all Sydney will want to see it.

One of the truly great pictures which will stand the test of time.

Ramon Navarro plays Ben Hur, and it is certainly his greatest screen triumph.

Audience Reviews for Ben-Hur: A Tale of the Christ

I think I ought to re-watch this movie. I did just watch it last week, but it was so long I got bored and wasn't paying attention. I do remember a few good scenes, and the epic landscapes and enormous cast are really cool looking, but it's just so long. It really looks like an expensive picture, and the main cast does a good job, so I think it deserves a re-watch.

Ben-Hur: A Tale of the Christ Quotes