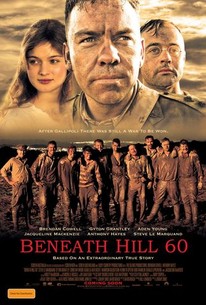 A weary platoon battles a powerful enemy in hopes of protecting a massive cache of explosives in this vivid World War I drama from director Jeremy Sims. ~ Jason Buchanan, Rovi

Critic Reviews for Beneath Hill 60

...the production design by Clayton Jauncey is particularly impressive with the dank, dripping trenches seeming to echo the futility of it all.

You've got to give full marks for the look of the film. It looks absolutely great.

This is our first really good movie about the Western Front. It's not faultless, but it does what it does very well.

Beneath Hill 60 for a while feels almost embarrassed to be a big war flick, but once it finds its nerve, it genuinely excels.

Perhaps the tension of the situation is not exploited quite as much as one would hope but this is an ambitious project that will resonate.

How they did it, and what it cost is the real story. I'm glad it's told as well as it is.

Has every chance of joining the ranks of Gallipoli and Breaker Morant. It may even contribute to future generations' understanding of the Australian experience in the Great War.

Marks the welcome return of the epic war movie, in this post-Gallipoli true life story of heroism, mateship, and the consequence of warfare.

A drab and derivative screenplay simply fails to build a single worthwhile or credible character.

Audience Reviews for Beneath Hill 60

Gritty Australian bio-pic about one of the unsung heroes of the first world war.

There have been a few World War I films in the history of film. However a few years ago, there was a talentless hack of a filmmaker called Paul Gross, who was influenced to make a so called war film by the name of Passchendaele. That film, I believe is the worst film in the history of film. Anyhow, because of that film I was apprehensive to watching another WWI themed war film. Beneath Hill 60 on the other hand peaked my interest. I finally got around to watching it, and though there are some love elements (the film is based on fact, and the love subplot has a point to the film, unlike Passchendaele where the love story was irrelevant throughout the film, and a big waste of the viewer's time.). Beneath Hill 60 is a tense, thrilling and true story of a group of Australian miners who would go on to change the course of the war. They would create the biggest explosion the world had ever seen. Beneath Hill 60 is a wonderful war drama that brings to light an important, previously untold story. Like I've mentioned, this film is based on fact, so everything you'll see in the film is relevant to the story. The film does dip into the romance a bit, but it's never cheesy or overused to the point it becomes laughable (like in Passchendaele). Beneath Hill 60 has terrific scenes that shows the horror of battle, and will definitely appeal to war film buffs. I enjoyed this film because I love history and I have always been fascinated with both World Wars. Beneath Hill 60 isn't an action packed war film a la Saving Private Ryan, the combat scenes are toned down a bit, and director Jeremy Sims focuses more on the miners themselves, which of course is the focus of this film. This is a superbly well acted and told picture that tells an important story of how a mining Battalion changed the course of the war by protecting and setting up a labyrinth of explosive charges underneath German lines. One of the best war films in quite some time, Beneath Hill 60 redeems the World War I genre of film after the travesty that was Passchendaele. A very engaging film.

From the beginning of this film, you know you're in for a bumpy ride. Once past the cryptic beginning of an Anzac getting dresse, the simple picture of a soldier, bent over double inside a tunnel with only a candle for light, unable to breath to loudly for fear of being heard by German soldiers sets the tone for the entire film. Being in a tunnel, whilst being extremely claustrophobic, gives each of the characters a new fear; being discovered. Anything above a whisper could result in hundreds of people being killed, one slip could bring an entire army down upon your head. Truly chilling to think about. And the film definitely lets you feel that danger, with enough instances of unexpected explosions or horrifying discoveries to let you know that this is the real deal. I found myself holding my breath for minutes at a time, only breathing when the people onscreen found it safe to do so. This could have easily dominated the entire film which would have made for an extremely scary movie involving characters which we knew nothing about. Instead, we are treated to generous amounts of our main character, Oliver Woodward's (played with incredible restraint by Brendan Cowell), backstory. And yes, the action in the trenches does overwhelm the somewhat weak love story between Oliver and his Marjorie, but it is a welcome break from the heart-in-mouth feeling of the war, and the overall effect is good, even though the script is not quite up to scratch and the girl who plays Marjorie can't act. These interruptions are felt to be exactly that near the end of the film and the wild tonal shifts are often offputting. But beyond that, the script is brilliant. Throughout all of the war pieces, there is never once a moment which doesn't feel like it should be there, never feels forced and it flows beautifully. It also highlights the great Australian camaraderie in a way which is reminiscent of Peter Weir's Gallipoli with great set pieces such as Streaky drawing the fire of a machine gun away from his mates or having an improvised rugby on an unused battle field. These moments are used sparingly which makes them even more special when they take place. One of the best decisions by writer David Roach was to include scenes of the German soldiers on the other side of the tunnel walls; showing their differences and their similarities to the Australians, making them more than just 'the enemy.' In fact if you weren't busy enough crossing your fingers for the Aussies, you'd be crossing them for the German guy whose outlandish ideas are constantly being shot down by his superiors. Showing the Germans to be human means that becomes all the more difficult to support Oliver's decisions, if they weren't difficult enough in the first place. The final, heartbreaking scene, is the best of the flashbacks, though it's technically a flashforward, and sums up the entire movie beautifully. Beneath Hill 60 is one of the best Australian war films ever made, joining the ranks of Gallipoli and Breaker Morant. Incredible film. Defining Scene: There can only be one. Woodward makes the toughest decision in his life.

When Australians think about the first World War, it pretty much begins and ends with Gallipoli. The equally bloody and pointless struggles of Australian troops in the trenches of the western front tends to get overlooked, and hopefully Beneath Hill 60 will go some small way towards redressing this imbalance. It doesn't hurt that, unlike most World War I stories, this doesn't get bogged-down story-wise in labouring over the horror of the trenches and the futility of war-- which might be important messages, but can get a bit dull over two hours. Beneath Hill 60 tells the story of Queensland miner Oliver Woodward (Brendan Cowell) and the First Australian Tunneling Division. Formed in 1916 to join the allied effort in tunneling under the German lines in Belgium, their mission was simple but dangerous: the Germans knew they were up to something, and were constantly digging counter-tunnels in the hope to breaking into theirs. Add in the risk of cave-ins, flooding, and the fact that they were going to be planting enough explosives under the German lines to create the biggest explosion the world had ever seen, and it's little wonder that much of this movie is suspense at its finest. It's apparent that to broaden the film's appeal, there weren't any women in the trenches. After all, it could weaken what could have been a gripping and memorable thriller. Nevertheless, this flick is still a good war movie. It's just that there's clearly a great one buried in the mud that never quite manages to get out.