Beneath The Harvest Sky2014 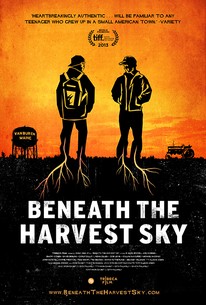 Beneath The Harvest Sky Photos

The official trailer for BENEATH THE HARVEST SKY is now available via Tribeca Film. Making its U.S. debut at this year's Tribeca Film Festival, BENEATH THE HARVEST SKY follows Casper (Emory Cohen, THE PLACE BEYOND THE PINES) and Dominic (Callan McAuliffe, THE GREAT GATSBY), who have been fiercely loyal friends since childhood. Desperate for a way out of their quiet town on the Maine-Canada border, the boys make a pact to pool their earnings on a car and hit the road. But when Casper is drawn into drug smuggling with his outlaw father (Aidan Gillen, "The Wire," "Game of Thrones") to pay his share, their friendship is pushed to the brink and adult choices forced on them all too soon. A standout narrative debut from Aron Gaudet and Gita Pullapilly (THE WAY WE GET BY), BENEATH THE HARVEST SKY is a gripping coming-of-age thriller set against an authentic portrait of small-town American life. (C) Tribeca

Will Martin
as Fluff

News & Interviews for Beneath The Harvest Sky

View All Beneath The Harvest Sky News

Critic Reviews for Beneath The Harvest Sky

While the climax of Beneath the Harvest Sky is a jumble of crosscutting, thunderstorms, and an inconveniently collapsing house, the movie never loses the pulse of people and tragedies it knows too well.

For all its missteps, the film feels authentic. Through thick and thin, it stubbornly maintains a thorny integrity.

Directors Aron Gaudet and Gita Pullapilly are documentarians making their fiction debut, and they pack the movie with seemingly authentic, nitty-gritty details about life in the potato country of far northern Maine.

Teenagers in a dead-end town aren't exactly a trailblazing topic.

Gaudet and Pullapilly have a background in documentaries, and there's a convincing naturalism to their storytelling.

While we're never surprised at the outcomes, we're satisfied because few if any notes ring false.

The performances in "Beneath the Harvest Sky" are better than the movie itself, an exceedingly derivative teen melodrama that too often loses focus and meanders off on lugubrious tangents with its criminal subplots.

A story that unfolds nearly as slowly as the potatoes ripen in the fields, the charismatic performances of the two young leads make all the difference.

Casper and Dominic are modern everymen -- theirs are not at all unique experiences, which is why their story resounds so loudly.

Beneath the Harvest Sky never finds a proper balance between its two halves. They never cohere properly, and the results pitch and lurch rather than harmonize.

An authentic representation of teenage angst. Beneath the Harvest Sky offers a genuine view of what it's like to grow up in rural poverty.

Audience Reviews for Beneath The Harvest Sky

There are no featured audience reviews yet. Click the link below to see what others say about Beneath The Harvest Sky!

Beneath The Harvest Sky Quotes