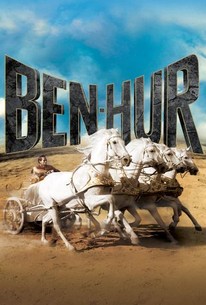 Record-breaking winner of 11 Oscars, including Best Picture, Director, Actor, Supporting Actor, and Score, this epic masterpiece stars Charlton Heston ("The Ten Commandments," "Touch of Evil") in the title role of a rebellious Israelite Jew who takes on the Roman Empire during the time of Christ. Featuring one of the most famous action sequences of all time -- the breathtaking chariot race. Directed by Oscar-winner William Wyler ("Mrs. Miniver," "The Best Years of Our Lives"). Recently selected as one of the top 100 American films of all time by the prestigious American Film Institute.

Ralph Truman
as Aide to Tiberius

Robert Brown
as Chief of Rowers

Maxwell Shaw
as Rower No. 43

Emilio Carrer
as Rower No. 28

Al Silvani
as Man in Nazareth

Aldo Silvani
as Man in Nazareth

Tiberio Mitri
as Roman at Bath

Jerry Brown
as The Corinthian

Otello Capanna
as The Byzantine

William Wyler never lets spectacle and size interfere with the elemental passions and conflicts of his human story. The spectacular aspects emerge naturally from the story -- the time and place and the customs of the society in which the characters live.

Clocking in at three hours forty-two minutes, Ben-Hur overstays its welcome. Still, despite scenes that occasionally run too long, the movie doesn't start to drag until after the chariot race and many of the early scenes are engaging.

Although it is a spectacle film, the story of how a man takes on the tyranny of the Romans, with all sorts of horrible consequences to himself and his family, is powerful and gripping.

The biggest and the best of Hollywood's super-spectacles.

Entire new frontiers in boredom were opened up by this MGM whopper from 1959.

The movie could be trying to say that for some people religion is an escape from their sexuality, but it seems unlikely.

62 years later, there's not much to say more than this is; an absolute masterpiece. What was accomplished narratively and technically all those years ago is a work of film geniuses. [Full review in Spanish]

Perhaps best known for the intensely climactic and lengthy chariot race, resulting in urban legend stuntmen deaths and one of the most widely recognized sequences ever filmed.

One of Wyler's greatest achievements is the way he portrays Jesus Christ, made with elegance and genius. [Full Review in Spanish]

Watching it was like waiting at a railroad crossing while an interminable freight train lumbers past, often stopping completely for a while.

The chariot race still holds up.

The most egregiously boring movie ever graced with the Best Picture Oscar... though in fairness, egregious boredom is one of the cornerstones of the Bible epic genre.

A sword and sandal epic intended to begger your measly little life...which it almost manages to do, dadgumit! Heston represents Israel groaning under the Roman yoke, needlessly persecuted, until we get to the famous climax: the chariot race. The notoriously long film should've ended there but instead tacks on a snooze-worthy bit about Christian redemption, perhaps as justification for the previous hours of hedonistic excess. Still, old school sumptuous-ness played for the epic factor, missing by only that much.

Powerful and masterfully crafted, Ben Hur is a timeless epic that will continue to thrill and move audience members throughout the generations.

William Wyler's epic and unforgettable masterpiece. One of the best remakes ever! Touching. Fresh.

William Wyler's Ben-Hur is one of the greatest epics in cinematic history. The film changed the medium forever and is a stunning accomplishment in film. Ben-Hur is a masterful piece of cinema that combines action and drama. The performances delivered by the actors are flawless and the film is powerful, exciting and of course epic in scope. The film is complimented with flawless acting and a grand musical score that adds so much atmosphere and elevates the tone of the picture. Charlton Heston delivers one of his greatest performances and is also one of the most iconic performances in cinematic history. William Wyler's directing is solid, and he tells an effective story that is slow to unfold, but is necessary. Wyler effectively plots a solid film that steadily builds up to a great climax. The cast here is brilliant. actors Charlton Heston as the title character and Stephen Boyd as Messala, Ben-Hur's friend that betrays him are great in their respective roles. The rest of the cast are great as well. Ben-Hur has some of the most iconic scenes ever put on film. Most notably the chariot race, which is a behemoth of excitement and superbly well staged, and is one of the most iconic scenes in Ben-Hur, not to mention in cinematic history. Ben-Hur is a film that is grand, epic and too big for words. This is an exciting, well acted film. Though Ben-Hur has some religious overtones, it doesn't overdo it, and it manages to be fairly limited in its content. The film is a standout piece of cinema that blends drama and action beautifully and will satisfy people who enjoy grand cinematic epics. Ben-Hur remains the film of which all grand sword and sandal epics are judged upon. With a great cast, a majestic score, stellar action and dramatic sequences, Ben-Hur's place in the cinematic medium is assured. A stunning, beautifully directed film that still has the power to capture your imagination fifty years after its release. This is a TRUE epic of cinema, and a film that shaped the cinematic medium forever.