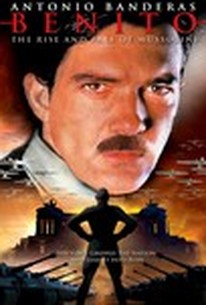 Antonio Banderas steps into the shoes of Italian Fascist dictator and prime minister Benito Mussolini in director Gian Luigi Calderone's epic biopic. From his stratospheric rise through the ranks of the socialist party to his youthful turn as the local chief of the Italian Socialist Party and his keen ability to turned leftist factions against one and other, Mussolini's treacherous rise to power is documented in vivid and illuminating detail. A one-time anti-war campaigner whose opportunistic nature led him to become one of history's most notorious tyrants, Mussolini would ultimately find himself on the brink of collapse as he turned his back on the pacifists who pressed for neutrality and sold his soul to the unflinchingly conservative government. ~ Jason Buchanan, Rovi

There are no critic reviews yet for Benito. Keep checking Rotten Tomatoes for updates!

There are no featured reviews for Benito at this time.