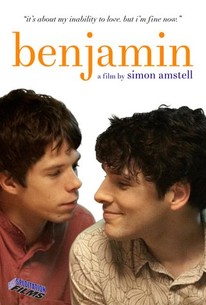 Critics Consensus: Inspired by first-time feature filmmaker Simon Amstell's own experiences, Benjamin is a heartfelt ode to the search for human connection.

Critic Consensus: Inspired by first-time feature filmmaker Simon Amstell's own experiences, Benjamin is a heartfelt ode to the search for human connection.

Comedy about being weird and struggling for connection. The film is about Benjamin, a rising star filmmaker, on the brink of premiering his difficult second film "No Self" at the London Film Festival when Billie, his hard drinking publicist introduces him to a mesmeric French musician called Noah. (Directed by famed British comedian Simon Amstell, the film is autobiographical and deeply personal.)

What's best about the film, though, is its concession to tenderness.

If this romcom were any lower-key, it might go off-radar - or off-gaydar - without trace. But Colin Morgan, as failing Irish-London film-maker, is terrific at doleful, muted self-regard.

A miraculously heartfelt love story, sweet and poignant in all its awkwardness.

These characters are so annoyingly hapless, you expect them to curl up on the floor and suck their thumbs at any moment.

Morgan is charmingly flustered in an early-Hugh Grant way, and Amstell has a knack for biting one-liners about the fundamental emptiness of human existence.

Helped by Colin Morgan's enjoyably sad central turn, this is a British comedy that knows when to bark and when to bite.

Through all its Shoreditch hipster pretension there is a fine balancing act of witty inelegance.

Chatty, insecure, painfully awkward, and thanks at least in part to its leading man's Irish accent, adorably twee.

Infused with his trademark wit, the film is hilarious at times but also carries with it more complex undertones. Benjamin is a gorgeous little film.

The film occasionally feels more like Amstell's personal exercise in exploring his own emotions and neuroses than a satisfying story, but there's enough warmth and wan smiles to make Benjamin a touching tale of love, learning and creativity.

There are no featured audience reviews yet. Click the link below to see what others say about Benjamin!