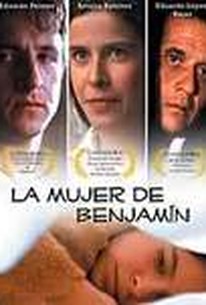 When he's not in his store working with his sharp-tongued, disagreeable sister, Benjamin, who never married, hangs out with his cronies. However, whenever the lovely and virginal teenager Natividad walks by, a hush falls over his group. Benjamin's gaze, in particular, remains fixed on her departing figure. The lads have noticed this and teasingly suggest that the overweight, fiftyish bachelor should kidnap her. One day, he actually does this. However, once he has her in his rooms he is much too shy to do anything with her. On the other hand, the far-from-innocent Natividad considers him to be a much better catch than anyone else she has seen in town (including her current boyfriend), and he appears to be someone who can be easily manipulated, so she refuses to leave. Instead, she quickly makes herself the dominant figure in his household. ~ Clarke Fountain, Rovi

There are no critic reviews yet for Benjamin's Woman. Keep checking Rotten Tomatoes for updates!

There are no featured reviews for Benjamin's Woman at this time.