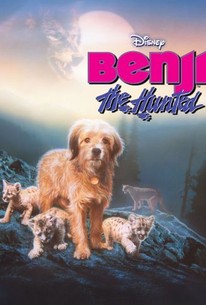 Both Benji the dog and his trainer Frank Inn play themselves in Benji the Hunted. Accidentally separated from Inn early in the film, the loveable pooch is forced to fend for himself in the Pacific Northwest. He latches onto a litter of cougar cubs, protecting them from harm while he himself has been targetted for a quick demise by a voracious black timber wolf. Filmed in Oregon and Washington, Benji the Hunted is more of the same from writer/director Joe Camp, the man who brought you all those earlier Benji epics. Camp's tendency to direct his doggie star with more confidence than his human actors is very pronounced here; in fact, the film would have benefitted immensely by a complete lack of human characters.

Benji
as Benji, Himself

Frank Inn
as Himself

Critic Reviews for Benji the Hunted

Joe Camp knows how to take advantage of the camera. [Full Review in Spanish]

It's perfect for snoozing to if Benji's soundless adventures begin to pall, as they may for post-nine-year-olds.

I liked individual moments and could have been good as a whole if Camp was also concerned with the human cast giving good performances, and if the movie had an appropriate score.

Benji shines in another simple but engrossing dog tale.

Benji's back after a ten-year absence from film, and teh dog star shows us what caring for others is all about.

Benji's lost in the wild! Get the kids!

Audience Reviews for Benji the Hunted