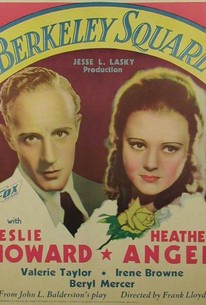 Adapted from John Balderston's successful stage fantasy (itself based on a story by Henry James), Berkeley Square is the story of a modern-day London scientist (Leslie Howard), who is romantically fascinated by the 18th century. A freak accident propels Howard back to 1784, where he assumes the identity of one of his own ancestors. Howard falls in love with his distant cousin Helen (Heather Angel), while his other relatives regard the time-traveller as a "sorcerer" due to his disturbing knowledge of future events. Gradually, Howard is disillusioned by the squalor and bigotry of the 18th century. He bids farewell to Helen, explaining that he will actually be born years after her death but that they will be reunited "in God's time". Returning to the present, Howard discovers that Helen died young without ever marrying. He renounces his own fiancee and determines to live out his life as a bachelor, to be united with his true love in death. Long considered a lost film, Berkeley Square was rediscovered in the mid 1970s. The film had already been remade in 1951 as the Tyrone Power vehicle I'll Never Forget You.

Juliette Compton
as Duchess of Devonshire

Lionel Barrymore
as Innkeeper
View All

There is absolutely no fault in the picture, Berkeley Square, except the fault in the original play, i.e., it is a cheesy profundity fashioned out of A Yankee In King Arthur's Court, dressed up in polite English.

Has a time travel theme. This was the first of many such films.

An early time travel movie which was undoubtedly a little mind blowing in 1933, and while it may seem a little creaky and less impressive 85 years later, itâ(TM)s still charming and entertaining. There are the usual sorts of cool, haunting aspects of the genre, thinking of people who had once lived full lives and walked this same earth, now long dead and buried, and wondering what it would be like to travel to the past to meet them. The film has all sorts of cute references to differences in mannerisms and language, as well as to people or events that those in 1784 wouldnâ(TM)t have known, but where it works best is in tugging on the heartstrings with a love separated by time, as cheesy as that might sound. There is something thatâ(TM)s so romantic about the line âI loved you before I ever saw you. In my first dream of you, coming from somewhere far away to meet me,â? maybe a little ridiculous too, but perhaps thatâ(TM)s what romance is. Leslie Howard and Heather Angel are strong here, and in addition to the love scenes, there is a fantastic sequence where she gets a glimpse of the future through his eyes, and is blitzed by a montage of horrifying images. Between this and his own growing disillusionment of the time heâ(TM)s now in (âDirt, disease, cruelty, smellsâ¦Lord how the 18th Century stinks!â?), we thus see the danger of glorifying either the past or the future. Itâ(TM)s tempting for me to think that by extension, itâ(TM)s showing us the need to simply be happy in the present, but thatâ(TM)s not the filmâ(TM)s point â" itâ(TM)s more along the lines of the timelessness of love, and its immortality, e.g. via an afterlife. Whether you believe that or not, itâ(TM)s a touching film, and I loved how it ended too.

A tremendously creative film featuring a mystical time traveling by Leslie Howard's character as he ventures to the period that he finds himself drawn to. Apparently the film was lost for a number of decades and I am tremendously happy that it has re-emerged.