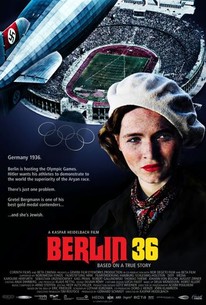 Based on the true story of Gretel Bergmann who unwittingly became the biggest threat to the Nazi Party in 1936. Berlin was hosting the summer Olympic Games and Gretel was one of Germany's best gold medal contenders. She was also Jewish. Her skill and ethnicity undermined the Nazi belief that Aryans were the superior race, so the German authorities schemed to replace Gretel with another woman -- but "she" had a secret that, if uncovered, could be even more embarrassing to the Nazis. -- (C) Corinth

Whatever the facts of the case, "Berlin 36" doesn't clear the bar for dramatic impact.

The lack of new insights on the subject of National Socialism's wickedness ultimately reduces a well-staged film to a historical footnote.

Kaspar Heidelbach's Berlin 36 may hold the dubious distinction of being the most tasteful movie to deal with Nazi Germany yet.

Not all true stories are created equal, as Berlin '36, which unfolds with such a singular lack of dramatic heft as to almost defy logic, amply demonstrates.

While this dramatization of a heartwrenching story is never less than fascinating intellectually and the actors are adroit, the screenplay by Lothar Kurzawa is choppy and at times slightly clichéd. It's as if someone has sat on the dramatic arc.

There are no featured reviews for Berlin 36 at this time.