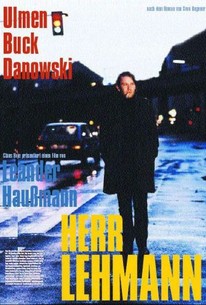 One of the key political events of the late 20th century fails to distract a man who is having a row with his parents in this comedy from Germany. The film takes place in the fall of 1989 in SO36, a neighborhood in West Berlin adjacent to the Berlin Wall, shunted into a corner and largely ignored. It is home to an oddball community of Bohemians and outsiders who pay little mind to the world around them. Frank Lehmann (Christian Ulmen) is a bartender who serves beer at nights to the motley citizens of SO36 and is oblivious to most everything except his lackadaisical pal Karl (Detlev Buck) and his ill-tempered girlfriend Katrin (Katja Danowski). A visit from Frank's parents throws his simple life into disarray, especially since his letters home led them to expect a far grander life than he's leading, and with this sudden chaos in his life, Frank barely notices that big things are happening on the other side of the wall. Herr Lehmann, also titled Berlin Blues, was screened as part of the "German Cinema" series at the 2004 Berlin Film Festival.

There are no critic reviews yet for Berlin Blues. Keep checking Rotten Tomatoes for updates!

There are no featured audience reviews yet. Click the link below to see what others say about Berlin Blues!