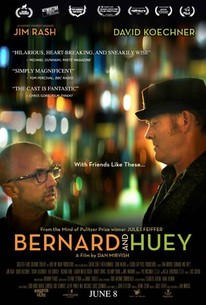 Directed by Slamdance Film Festival co-founder Dan Mirvish (BETWEEN US) from a long-lost script by Oscar/Pulitzer-winning cartoonist and screenwriter Jules Feiffer (Mike Nichols' CARNAL KNOWLEDGE, Robert Altman's POPEYE) based on characters that date back to 1957, BERNARD AND HUEY is the story of roguish Huey (David Koechner, ANCHORMAN) and nebbishy Bernard (Oscar-winner Jim Rash, THE WAY WAY BACK), who are unlikely collegiate friends in late 1980s New York. Years later, a bedraggled Huey crashes at Bernard's upscale bachelor pad. As the two reconnect, Bernard falls in love with Huey's estranged daughter Zelda (Mae Whitman, GOOD GIRLS), an aspiring graphic novelist who's got a seductive new creative partner, Conrad (Eka Darville, JESSICA JONES). Huey slowly gets his mojo back and tries to seduce the various women in Bernard's life, including his off-again girlfriend Roz (Sasha Alexander, RIZZOLI & ISLES) and colleague, Mona (Nancy Travis, SO I MARRIED AN AXE MURDERER), while reconnecting with his ex-wife (Bellamy Young, SCANDAL) and brother (Richard Kind, ARGO). As Bernard and Huey return to their old ways, at least one of them finds himself in danger of marrying a woman old enough to be his wife. An award-winning film that's screened at over 25 festivals in 5 continents, BERNARD AND HUEY is a particularly timely story of two men behaving badly, and the smart

Eka Darville
as Conrad
View All

News & Interviews for Bernard and Huey

View All Bernard and Huey News

Critic Reviews for Bernard and Huey

Among the film's chief pleasures are outstanding performances from Rash as the older Bernard and, especially, Koechner as the contemporary Huey.

Bernard and Huey is a small pleasure; it's almost always welcome to watch a character-based film crafted without pretentions...

A lovingly detailed look at two unhappy and unpleasant men.

Wades in its own shallow cleverness, and seems to be under the misapprehension that acknowledging the shallowness of the characters and storyline is, in itself, clever. But it only takes a few scenes for that observation to become painfully obvious.

Devoted Feifferites, not to mention fans of Mr. Rash and Mr. Koechner, who get to flex their muscles nicely here, will be well sated.

David Koechner and Jim Rash deliver one of the best examples of camaraderie on screen this year. Bernard and Huey are relics in the age of the #MeToo movement.

This is mid-century comedy masquerading as millennial, and the mask keeps slipping.

As much as I enjoy "faintly repulsive," like New Yorkers themselves, the movie's a bit exhausting to be around

To watch Bernard and Huey is to play a game of trying to decide which of the two main characters would make more irritating company.

Most of the running time it's Jim Rash speaking Jules Feiffer's words, which makes 2018 just a little more bearable.

Audience Reviews for Bernard and Huey

There are no featured audience reviews yet. Click the link below to see what others say about Bernard and Huey!