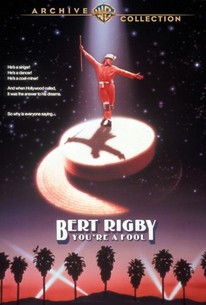 Bert Rigby, You're a Fool Photos

Tony award-winning British musical comedy star Robert Lindsay makes his first important American film appearance in Bert Rigby, You're a Fool. Lindsay, of course, plays the title character, a coal miner who dreams of becoming a big showbiz star. Only problem is, there's very little demand for Bert Rigby's impersonations of Buster Keaton and Gene Kelly. Undaunted, Bert heads to Hollywood, where, while working as a butler in the household of movie mogul Jim Shirley (Corbin Bernsen), he must fend off the advances of Shirley's hot-to-trot wife, Meredith (Anne Bancroft). Befitting the old-fashioned nature of Bert Rigby's behavior and tastes in entertainment, director Carl Reiner adopts a "retro" approach to his material; at times, the film looks as though it was made in 1939 rather than 1989, despite its R-rated sex, profanity, and body-function jokes.

Critic Reviews for Bert Rigby, You're a Fool

Bert Rigby harkens back so effectively to the golden days that we want to be there, instead of in this movie.

I expected very little and received a nice treat.

There are no featured reviews for Bert Rigby, You're a Fool at this time.

Bert Rigby, You're a Fool Quotes