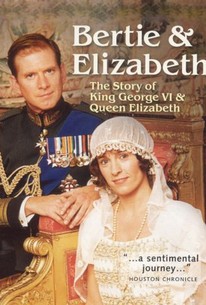 The fascinating story of King George VI and Queen Elizabeth is recounted in this British made-for-TV effort. It all begins in 1920, when the then-Duke of York Albert (James Wilby), known affectionately as Bertie, meets and falls in love with the aristocratic, 19-year-old Elizabeth Bowes-Lytton (Juliet Aubrey). Although their marriage makes international headlines, the mild, unprepossessing Bertie knows that he will always play second fiddle to his dashing older brother, the Prince of Wales, in the hearts and minds of the British people. This is never more true than when Bertie's brother ascends to the throne as King Edward VIII in 1936. That same year, however, the new King abdicates so that he may marry the woman of his choice, thereby thrusting the reluctant Bertie into the limelight as Monarch of the British Isles. Spurred on by the love and devotion of his lifelong helpmate Elizabeth, Bertie -- now King George -- proves more than worthy of his new burdens and responsibilities, especially during the darkest days of WWII. Although the King passes on in 1952 (a death hastened by his fondness for tobacco), Elizabeth lives well past the century mark, beloved by her subjects as the mother of the future Queen Elizabeth II and the impulsive Princess Margaret. A co-production of Carlton Television and PBS, Bertie and Elizabeth was telecast in America as part of the Masterpiece Theater anthology on February 4, 2002.

Critic Reviews for Bertie and Elizabeth

There are no critic reviews yet for Bertie and Elizabeth. Keep checking Rotten Tomatoes for updates!

Audience Reviews for Bertie and Elizabeth

Made for tv style of movie. Lightly done. No real depth. Something to pass the time..