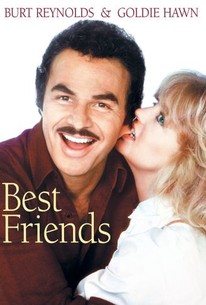 We'd rather not speculate over how much of Best Friends is autobiographical. We'll just note that this story of a male-female screenwriting team was written by real-life married scenarists Barry Levinson and Valerie Curtin. Lovers as well as collaborators, scriveners Richard Babson (Burt Reynolds) and Paula McCullen (Goldie Hawn) decide to make their union legal. Predictably enough, they discover that their relationship goes straight downhill after they say "I do." The stars are far less interesting than the supporting cast, including Jessica Tandy and Barnard Hughes as Hawn's parents, Audra Lindley and Keenan Wynn as Reynolds' folks, Ron Silver as an avaricious producer (no names, please!), and Richard Libertini as a Mexican justice of the peace.

Douglas Roberts
as Stuart
View All

So far, this sounds like a series of fairly predictable scenes. But they're redeemed by the writing and acting. The dialogue doesn't sound like reprocessed sitcom, and there are charming moments.

There are lots of laughs in the script by Valerie Curtin and Barry Levinson, as well as wry insights into modern relationships.

Though engaging and agreeable, the film is never wildly funny.

Even when Best Friends isn't working uproariously as a comedy, there's an element of original, offbeat humor that keeps it promising.

Considering the source material (real life of writers Barry Levinson and Valerie Curtin, and the caliber of stars, Hawn and Reynolds, this comedy is disappointingly shallow and predictable.

Honest, touching and funny. An underrated gem that deserves to be rediscovered.

Best Friends is such a forgettable film I had no recollection of it ever being made.

The script plods through autobiographical self-indulgence with some warmth but too few laughs.

An okay realistic family drama movie about marriage. If you ask me, it's too realistic, so much so that it's boring. Overall it's okay, though.

It wasn't a comedy, and it wasn't quite a drama. It was more like one large depression spiral of how two people can ultimately make each other unhappy no matter what they do. The music, which was Oscar nominated, was so sappy and 80's tinted that it drove me bananas, and Burt Reynolds was not his usual self confident self, but some tame invalid. Overall, it was very disappointing.