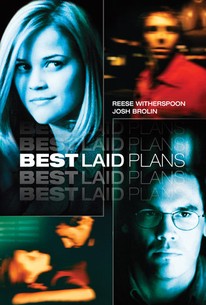 Absolutely nobody is who he or she seems in this stylish thriller about a guy who wants to get out of his fly-speck hometown, the girlfriend who wants to help him, and the successful friend who just might make it possible. When Bryce (Josh Brolin) returns to his tiny hometown of Tropico, NV, he finds pal Nick (Alessandro Nivola) still living there unhappily. One night the pair meets a beautiful blonde at the bar and eventually Bryce takes her back to the house where he's staying. When the girl, Lissa (Reese Witherspoon), reveals that she's under age and threatens to turn Bryce in for statutory rape, he panics, ties her up in the basement, and puts in an anguished call to Nick. Little does Bryce realize, however, that Lissa is actually Nick's very grown-up girlfriend, and that the two lovers have decided Bryce and the ritzy house where he's staying will play a major role in their bid to leave behind dead-end Tropico forever. ~ Brian J. Dillard, Rovi

Alec Berg
as Phone Guy No. 1

Jeff Schaffer
as Phone Guy No. 2

[Best Laid Plans] is so concerned with being a film that it forgets to be a movie.

A surprisingly underrated little thriller which should have helped Nivola earn his Hollywood stripes.

One twist too many. Or one too few.

An enjoyable roller-coaster ride that stops short of reaching its destination.

The attempt of this B-film to be a convincing film noir never materializes...

Barker and Griffin obviously had an intriguingly twisty course clearly mapped out for themselves. Alas, much like those mice and men...

a half decent attempt at a film, was a bit disinterested if i am honest a 6/10.

Good thriller with a lot of twists. Well acted and thouroughly enjoyable.

A decent enough thriller. The three leads put in great performances, but it never really takes off or comes to anything more than mildly entertaining. Was really just shoved in with a lot of other disstorted narrative pictures, and really that's all it has going for it.