The Best of Everything1959 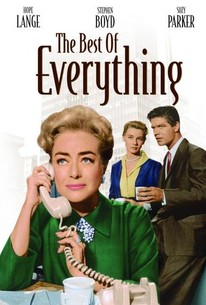 The Best of Everything Photos

Amanda Farrow (Joan Crawford) is a successful book publisher having an unsatisfying affair with a married man. Her female co-workers having affairs as well. The women fall prey to their conniving, insensitive men and are seemingly taken advantage of the entire film. A pregnancy, a proposed cohabitation and marital infidelity are all depicted among the career women working on Madison Avenue and at Rockefeller Center. Co-stars are Hope Lange and Louis Jourdan.

Julie Payne
as Girls in Typing Pool
View All

Critic Reviews for The Best of Everything

The picture is done in color by DeLuxe and features some fantastically chic attire worn beautifully by the many members of the cast.

The Best of Everything earned Oscar nominations for Best Original Song (the title tune, warbled by Johnny Mathis) and Best Color Costume Design, though the real achievement is the splendiferous Cinemascope lensing by William C. Mellor.

It all seems trite and overly melodramatic.

Audience Reviews for The Best of Everything

dated look at working women but incredibly plush and enjoyable

The Best of Everything Quotes