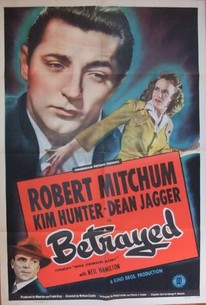 Betrayed is the reissue title for the classic melodrama When Strangers Marry. In her third film, Kim Hunter plays a waitress who comes to New York to meet her husband Dean Jagger. Kim's marriage was a whirlwind affair, and as a result she barely knows her husband. She soon discovers that Jagger may be involved in a murder -- and that he very well may be a homicidal maniac. Designated by film-historian Don Miller as the finest "B" picture ever made, Betrayed is chock full of superb cinematic touches, courtesy of director William Castle. Best bits include the shot of Kim Hunter staring out her hotel window, her face illuminated by a flashing neon sign, and a "shock cut" straight out of Hitchcock's The 39 Steps. Third-billed Robert Mitchum was elevated to star status on the reissue prints of When Strangers Marry, which unfortunately tended to give away the film's surprise ending; also in the cast in a tiny role is Mitchum's future Out of the Past co-star Rhonda Fleming. One of the most convincing performances is delivered by character actor Lou Lubin, who plays a shaking-in-his-boots murder witness. Filmed in ten days, Betrayed was another box-office winner for the canny King Brothers producing team. ~ Hal Erickson, Rovi

Rhonda Fleming
as Girl on Train

George Lloyd
as Hugo the Great

Sam McDaniel
as Porter
View All

It created a chilling NYC atmosphere.

There are no featured reviews for Betrayed at this time.