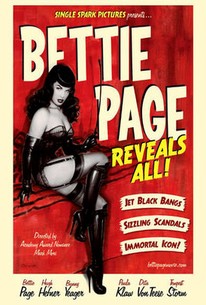 Critics Consensus: It's ironically lacking in aesthetic appeal, but Bettie Page Reveals All most effectively honors its subject by letting her tell her own story.

Critics Consensus: It's ironically lacking in aesthetic appeal, but Bettie Page Reveals All most effectively honors its subject by letting her tell her own story.

Critic Consensus: It's ironically lacking in aesthetic appeal, but Bettie Page Reveals All most effectively honors its subject by letting her tell her own story.

Academy Award-nominated filmmaker Mark Mori's BETTIE PAGE REVEALS ALL is an intimate look at one of the world's most recognized sex symbols, told in her own words for the first time. In Mori's alluring documentary, the real Bettie Page emerges from the veil of myth and rumor via audio interviews taped a decade prior to her death in 2008. With earthy, razor sharp wit, Bettie tells her life story -- from humble beginnings as one of six children in an impoverished southern family, to high school salutatorian, to scandalous 50s pin-up model, to shocking retirement in 1957 at the peak of her modeling career. Sharing rare details about her short-lived first marriage and many torrid affairs, this keen insider's glimpse follows Bettie through decades of broken marriages, born-again Christianity, and bouts of mental illness, before her ultimate return to the public eye in the early 90's, unaware of her cult status. Ranked by Forbes in 2012 as one of the top ten posthumous celebrity earners, Bettie and her enduring legacy continue to flourish. (c) Music Box Films

Page's natural beauty, charisma and genuine sense of fun - not to mention her 36-24-37 measurements - come clearly through in Mori's tale.

An amateurish and oddly paced documentary, "Bettie Page Reveals All" nonetheless turns out to be revealing, if perhaps not in the way its makers intended.

The best thing about this documentary portrait of the beloved 1950s pin-up is its meaty narration, courtesy of Page herself, speaking in the low, slightly gravelly register of an aging Southern belle.

The film offers frank, matter-of-fact commentary that is far more illuminating than the talking-head encomiums served up by the likes of Perez Hilton, Dita Von Teese, and Hugh Hefner.

The film's reason for being, though, is the sound of Page's voice -- a worldly, aged Southern drawl -- as she recounts her life story from childhood through retirement.

A scintillating, sincere and empathetic portrait of the pinup queen who attained her greatest influence as an icon of female sexuality decades after she retired.

Although disturbing at times, Bettie Page Reveals All is an effective look at the sometimes troubled life of a modeling icon.

Mori does a tremendous job of explaining the entertaining and emotionally resonant life journey of one of America's most unusual cultural icons.

Bettie's as cool as a cucumber, and it's this unwavering sunny disposition and air of class that makes her image immortal.

[Bettie] Page's most striking feature, aside from her obvious beauty, is her humility: she truly doesn't get why people think she's so great. But you will after watching this riveting film.

A shoddily made, amateur-hour barrage of chintzy music, stock footage and flashy video effects that were presumably state of the art during the Reagan administration.

Bettie Page Reveals All is an excellent amalgamation of the history of Page and her incredible impact on modeling and fashion, mostly told in her own voice.

We never see Bettie as she narrates the story of her life but the images are everywhere and they endure. Hers is a fascinating story of fame away from the mainstream and the stories are tremendously engaging.