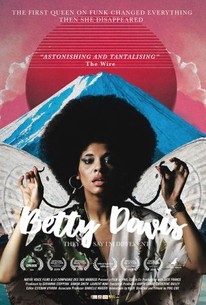 Betty changed the landscape for female artists in America. She "was the first," as Miles Davis said. From an early age, Betty freed herself from social rules traditionally imposed on women and insisted on complete control of her image and recordings, and in the case of her turbulent marriage to Miles Davis, her personal life as well. At the height of her fame in the early 1980s, she mysteriously disappeared from public life. In late 2012, after intensive research, the filmmakers discovered Betty Davis living quietly alone in Pittsburgh. After several months of conversation, she entrusted the filmmakers with telling her story.

This is probably as close to [Betty] Davis as anyone's going to get, and [director Philip] Cox augments her guarded recollections with a vibrant, seductive introduction to her music.

The film is a cinematic interpretation of Davis' life, emulating her subversive style by blending testimony with psychedelic animation and an assortment of unconventional nonfiction techniques.

There's enough material to get a taste of her fiery shows, uninhibited lyricism, and arresting fashion sense - silver-sequin hot pants above all - but not enough to fill out the standard running time.

Betty, however, reveals and the genius of the woman who was a songwriter, bandleader, fashionista, and singer - a funk renaissance artist.

Betty is crucial to any fan who desires a deeper understanding of this pioneering female funk auteur.

There are no featured reviews for Betty: They Say I'm Different at this time.