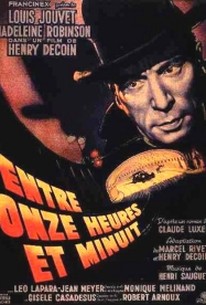 Writer/director Henri Decoin serves up another sure-fire box-office winner in Entre Ouze Heures et Minuit (Between 11 O'Clock and Midnight). Louis Jouvet stars as Inspector Carrel, who is quite surprised to learn that he has an exact double, a notorious criminal. When his look-alike is killed, Carrel assumes the dead man's identity, hoping to pick up a few clues concerning a few unsolved cases. The first thing he learns is that his double had a very healthy sex life. When he's not up to his kneecaps in dead bodies, Carrel is fending off a steady stream of lovely young ladies. Filmed in 1948, Entre Ouze Heures et Minuit received a limited American release the following year.

There are no critic reviews yet for Between Eleven and Midnight (Entre onze heures et minuit). Keep checking Rotten Tomatoes for updates!

There are no featured reviews for Between Eleven and Midnight (Entre onze heures et minuit) at this time.