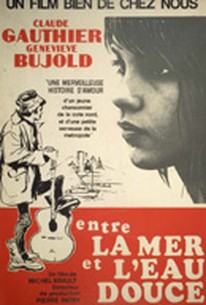 A young man (Claude Gauthier) sets out from his hometown of Quebec and travels to Montreal to seek his fortune. He takes a succession of odd jobs before hitting it big as a singer. He has eyes for a waitress (Genevieve Bujold) in a greasy spoon diner before his crooning career takes him to hang out in more upscale restaurants. The young man falls for another girl who leaves him, and he is just as lonely as he was in his small town in Quebec before he found success. All the money in the world won't bring back his girl in this independent feature with the backdrop of burgeoning speeches of Quebec declaring independence from the rest of Canada. ~ Dan Pavlides, Rovi

Far more fascinating than the romance between Paul Gauthier's and Genevieve Bujold's characters in the 1967 Quebec timepiece Entre la mer et l'eau douce are the insights the film provides into separatism.

Even though some scenes have inevitably lost emotional currency, Brault's first feature remains a fascinating, boldly authoritative examination of Quebec society in the turbulent interlude between the eras of Maurice Duplessis and Rene Levesque.

A crisply shot, b & w throwback to cinema that was interested in flashes and glimpses of everyday people . . . a rough-and-ready trip along the currents of struggling lives.

There are no featured reviews for Between Sweet and Salt Water (Entre la mer et l'eau douce) at this time.