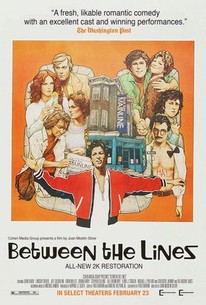 Between the Lines Photos

Between the Lines was deftly directed by Joan Micklin Silver on a miniature budget. The drama is set in the offices of an "alternative" newspaper, vaguely reminiscent of The Village Voice (where Silver once worked). The large ensemble cast of then-unknowns is headed by John Heard, playing a photojournalist who takes time off from trying to save the world to have a brief affair with Lindsay Crouse. Other employees and hangers-on include Jeff Goldblum, Jill Eikenberry, Bruno Kirby, Lane Smith and Marilu Henner.

Allison Argo
as Dancer
View All

Critic Reviews for Between the Lines

Between the Lines is barely about a newspaper at all, more about a bunch of youngish people whose energies are running out, as American counterculture itself had run their course, with the '80s and its hard-nosed principles about to kick in.

For most of its talky running time, Between the Lines is a hangout film in which too few of the characters are good company.

It'll make you miss the storied Phoenix that much more...

Imagine if you dropped the cast of Return of the Secaucus Seven into a workplace drama, and you have a good sense of the feel of this small but worthy movie.

Joan Micklin Silver, who also directed Hester Street, has fashioned a film so close to home that it will be hard for any journalist to be disassociated from it.

Part journalism drama, part sex comedy, Between the Lines is an overlooked gem that chronicles the Boomer slide from counterculture to complacency.

As alternative newsweeklies continue to disappear at an alarming rate, soon to become as extinct as dinosaurs, Between the Lines takes on an even greater nostalgic vibe than ever before.

Boston audiences will be treated to location shots of Harvard Square in its pre-globalization heyday while cinephiles will delight in early performances of stars like Jeff Goldblum before they were known...

This deceptively breezy comedy has a wistful, end-of-an-era vibe that time has only sweetened.

There's still sweet tang, a rising waft of authenticity. The fictional Main Line is losing its counterculture cred-the 1960s had been over for a while-but life, and loving, goes on. Like Jeff Goldblum.

Films about intrepid reporters are myriad ... but did anyone ever write a screenplay about Wayne Barrett and Robert Christgau's pioneering years at The Village Voice?

... a film that connects very directly with a vital and apparently spontaneous style, close to films like Next Stop, Greenwich Village, by Paul Mazursky, or even Easy Rider... [Full review in Spanish]

There are no featured reviews for Between the Lines at this time.

Between the Lines Quotes