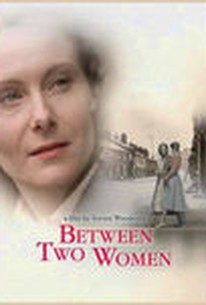 Two women form a special bond in a working-class British town shortly after World War II in this drama. Ellen Hardy (Barbara Marten) is a housewife and mother living in a dark and dingy industrial town in the North of England. Her husband Geoff (Andrew Dunn) is unsophisticated and uncommunicative, but Ellen dotes on Victor (Edward Woodcock), her ten-year-old son who displays a real talent for painting and sketching. Ellen is introduced to Kathy Thompson (Andrina Carroll), who teaches art at Victor's school, and the two women soon strike up a friendship. As they get to know one another better, Ellen and Kathy become aware that their feelings go beyond simple friendship, but they both live in a time and place that makes it difficult from them to act upon their desires. Produced for British television, Between Two Women was the first feature-length film from writer and director Steven Woodcock. ~ Mark Deming, Rovi

Critic Reviews for Between Two Women

There are no critic reviews yet for Between Two Women. Keep checking Rotten Tomatoes for updates!

Audience Reviews for Between Two Women

LoveFILM sent it me by mistake. Nice 50s scenes of Northern England but the dialogue between lead characters was ever so cheesy and the plot hopeless shallow.