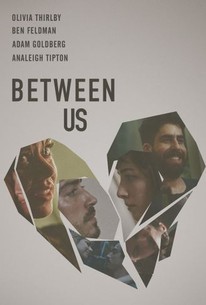 A long-term relationship threatens to implode over the course of one tumultuous night in the engaging romantic comedy-drama BETWEEN US. After six years together, thirtysomethings Henry (Ben Feldman, Mad Men, Superstore) and Dianne (Olivia Thereby, Juno, The Stanford Prison Experiment) are caught between their fears of commitment and societal pressure to settle down and marry. An impulsive decision and a surprise revelation send them into an emotional tailspin. Heading out into the LA night, Henry and Dianne each encounter strangers - he a free-spirited rocker (Adam Goldberg, Saving Private Ryan), she a charming artist (Analeigh Tipton, Crazy Stupid Love) - who offer the possibility of new romantic thrills. The choices Henry and Dianne make will determine what - if anything - will be left of their relationship come morning. By turns brutally honest and incisively funny, BETWEEN US is a raw, real look at the rocky terrain of 21st-century romance.

Critic Reviews for Between Us

Stingingly attuned to the tension between long-term love and last-minute misgivings, "Between Us" makes a familiar situation feel remarkably fresh.

For Between Us to be special, Illingsworth and his leads would have to animate the familiar with the particular, but Dianne and Henry hew too closely to type.

Feldman, who played Ginsberg on Mad Men, and Thirlby, who's probably still best known as the best friend in Juno, lend shading to characters whose personal and professional lives seem stuck at the first-draft stage.

Illingworth aims to capture a vital relationship at a crucial turning point, but Between Us fails because Dianne is half-formed.

Between Us goes straight for the jugular, offering an acerbic, brutal, and insightful look at a modern-day relationship. With a strong script and two enthralling central performances, this drama is a must-see - although maybe not for date night.

The title characters in this low-budget romance spend so much time convincing each other of their affections, but they fail to convince the audience.

Unfortunately, Between Us does little to distinguish itself from the pack of similar movies treading the same ground

Though it runs into a couple of bumps along the way, Between Us is a well observed and sensitive indie drama that'll be familiar to anyone struggling with the onset of maturity.

David James
We Got This Covered
View All Critic Reviews (8)

Audience Reviews for Between Us

There are no featured audience reviews yet. Click the link below to see what others say about Between Us!