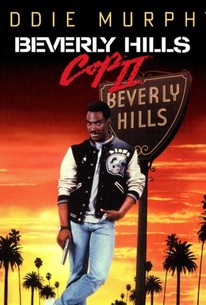 The young black cop from Detroit is still on vacation in Beverly Hills. In this sequel to the 1984 original, he is attempting to find the mastermind of a series of violent robberies in spite of a mean-spirited Chief of Police..

Hugh Hefner
as Himself

Eugene Butler
as May

Carrie Leigh
as Herself

Susan Lentini
as Receptionist at Hef's

Michael Demarlo
as Doorman at Adriano's

Darryl Henriques
as Maitre D' at 385

Ritch Shydner
as Guard at Hef's

Dayna O'Brien
as Girl at Club

Why do filmmakers try to improve on the original with louder music, bigger stunts, grosser situations? Such questions come to mind on viewing Beverly Hills Cop II, Paramount's attempt to renew its 1985 gold mine.

The film seems... to be a precisely timed affair: so many seconds for this, so many for that, and the natural flow of the story be damned.

What is comedy? That's a pretty basic question, I know, but Cop II never thought to ask it.

As with most sequels, the story, characters, gags, and style deteriorate just a little bit, and this series is no exception.

Sometimes sequels never live up to the original. As much as Beverly Hills Cop II echoes that sentiment, the late, great director Tony Scott delivers a film that encapsulates the pinnacle of 80s films in terms of culture, style, fashion and action.

essentially repeats everything from the first film, but louder and flashier

[Nothing] really, except a delivery system for Murphy. But Murphy in those days was appealing enough that this proves to be very nearly sufficient.

Been there and done that better.

Not as good as the original, but fast and funny enough to suffice fans

Although its much sillier than its more memorable predecessor, this is a funny sequel with a charismatic performance from Murphy with good slapstick and the occassional moment of wit.

Wow, there are more cuts in the first ten minutes of this movie than their are in all of the first film. And that's not a bad thing, Tony Scott turns up the style and the crazy in this very watchable sequel to the very popular original. It's shot better than the first, but the script isn't as good. Eddie Murphy does that stupid laugh too many times too,

Not bad, memorable moments aren't there, Eddie Murphy can only laugh so much. The first movie made so much money that sequels were inevitable, but Beverly Hills Cop shouldn't have been a franchi-chise.