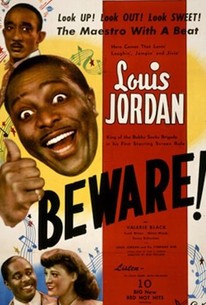 One of the few all-black productions of the 1940s to garner attention in the "white" trade press, Beware is a vehicle for bandleader Louis Jordan, here cast as a college alumnus named Lucius Brokenshire Jordan. Thanks to the economic duplicity of its benefactor's grandson, Jordan's alma mater runs out of money. When he learns about the college's plight, our hero not only stages an impromptu fund-raising show, but also settles the hash of the crooked grandson. In its own modest way, the film pokes fun at the snobbery of college faculty members who look down their noses at graduates who enter show business rather than pursue more "worthwhile" careers. Costarring with Louis Jordan are Frank Wilson and Valerie Black, both cast members of Broadway's +Anna Lucasta.

There are no critic reviews yet for Beware. Keep checking Rotten Tomatoes for updates!

There are no featured reviews for Beware at this time.