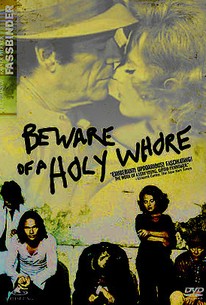 This film by wunderkind Rainer Werner Fassbinder, his 10th, is one of the rare films about filmmaking which was said by the critics to have succeeded both technically and as drama. In it, a German film crew sits in their Italian hotel, waiting for the arrival of their director (Lou Castel), their star (Eddie Constantine) and more money. While they wait, argue, complain, and enter and leave romances, the delusions of a whole community of filmmakers are humorously unveiled. This film is said to be a scathing and satirical self-criticism by Fassbinder of his own methods and of his colleagues and entourage. ~ Clarke Fountain, Rovi

This is how the cinema looked, in 1971, to the twenty-six-year-old director Rainer Werner Fassbinder, who already had ten feature films under his belt.

Beware Of A Holy Whore is splendid to look at, even though most of the film consists of bored and/or disgruntled show-folk lounging around a Spanish estate while working on a movie.

Beware of a Holy Whore is the work of a very young, very gifted film maker.

Beware of a Holy Whore is essentially Contempt by way of Andy Warhol's Factory.

Fassbinder, with a disruptive style, frames the creative crisis and dissatisfaction from the filmmaking process, but with a result that only reveals the lack of momentum and the futility established by self-indulgence. [Full review in Spanish]

Cheekily casting himself in a bit of a heroic role instead of as the so obvious directorial surrogate of a main character, this is Fassbinder with the gloves off.

Beware of a Holy Whore is the film you would make if you spent the previous ten years on a steady diet of Godard and Warhol, with occasional afternoons cleared for Antonioni and every night reserved for hard drinking.

Interesting, but static and overlong.

Fassbinder stacks the cast around the limited space with the mastery of a chess player, creating a strong sense of ennui, sexual frustration and creative stagnation.

Whore of a film.

This Fassbinder film involves an almost complete film crew which is filled with snobs and queers. It wasn't a group I'd like to spend time with, but one that's fascinating to watch. While watching one can wonder if this was the film that inspired the casting for The Jersey Shore. The movie lives up to its title, which is what lured me in. Beware of a Holy Whore is no Surf Nazis Must Die, in which the title is superior to the film. The movie is stunning and gorgeous. The cinematographer Ballhaus (who's worked with Scorsese many times) did a good job on this film, but I hate the zoom ins on the faces. The acting was spot on and almost flawless, characters were consistent with themselves. I was expecting an orge throughout this whole film, I won't spoil if this happened or not.

Fassbinder's (self-?)parody gets a bit monotonous after a while & feels forced & too obvious at times but overall the whole thing works somehow, Fassbinder & Castel are fun to watch

[font=Century Gothic]In "Beware of a Holy Whore", a German film crew is staying in a Spanish hotel waiting for production to start. The star(Eddie Constantine) and director(Lou Castel) arrive but still there are problems like the checks bouncing, causing non-delivery of the necessary materials.[/font] [font=Century Gothic][/font] [font=Century Gothic]With "Beware of a Holy Whore", Rainer Werner Fassbinder(he also stars) captures perfectly the chaos and energy of a set on a low budget film, especially one in a foreign country. The problem is that there are too many personal conflicts to count, and the whole scenario is decidedly unfocused with too many people screaming at one another.[/font]