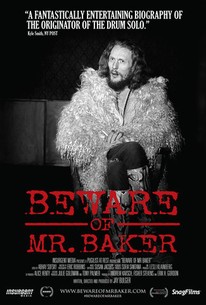 Critics Consensus: Free of the hagiographic overtones that dog many documentary profiles, Beware of Mr. Baker presents a clear-eyed, thoroughly gripping look at one of rock's greatest -- and most personally problematic -- musicians.

Critics Consensus: Free of the hagiographic overtones that dog many documentary profiles, Beware of Mr. Baker presents a clear-eyed, thoroughly gripping look at one of rock's greatest -- and most personally problematic -- musicians.

Critic Consensus: Free of the hagiographic overtones that dog many documentary profiles, Beware of Mr. Baker presents a clear-eyed, thoroughly gripping look at one of rock's greatest -- and most personally problematic -- musicians.

At home with rock 'n' roll monster Ginger Baker, Cream's legendary scarlet-maned, hell-raising drummer. This no-holds-barred, sad, and hilarious portrait of the man referred to as rock's first great drummer (and perhaps still its best) lets him tell his own story, intercut with footage of his continent-hopping life, from London to L.A., Nigeria, Italy, South Africa, and (way) beyond. Baker may have broken the mold musically, but his violent, dyspeptic mood swings, fueled by a multi-decade heroin addiction, went a long way to making him persona non grata even among the music greats who still revere his work. Eric Clapton, Johnny Rotten, Charlie Watts, and Lars Ulrich, Baker's 4 wives, and 3 grown children all have something to say about him: "He's a force of nature," "he's the greatest drummer any of us had ever heard," "he's mad," and "he's fairly consistently horrible" are just a few of them.

Masters of Reality
View All

Bleakly entertaining, Beware of Mr Baker neither eulogises nor patronises its subject; one day (though possibly not soon), Baker may take it upon himself to say thanks.

It's a broadly forgiving portrait of an impossible, irascible talent, who seems to have treated life much like his instrument.

We are always being told that books and movies have to have "sympathetic" lead characters - well, here's a documentary that does very well without one.

An interesting character study interspersed with classic rock, jazz and Afrobeat clips. Nothing more, but certainly nothing less.

It's all insanely enjoyable.

A deceptively unconventional rock 'n' roll tale of drink, drugs, drums and ponies, Bulger's Beware of Mr. Baker saddens as much as it elates.

As jaw-dropping as Ginger Baker's drumming is, the man himself is even more rattling.

The kind of august rogue who threatens to put his director in hospital and punches him in the face with a cane-and makes him like it.

...essential viewing for classic rock fans and anyone who loves a good rogue of questionable moral character, undeniable talent and a road case full of excellent stories.

What makes this an excellent music doc is the sadness that comes through the madness.

An entertaining doc on the volatile but great jazz and rock drummer, the controversial London born Ginger Baker.