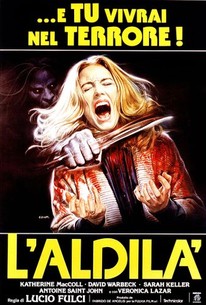 A young woman inherits an old hotel in Louisiana where after a series of supernatural 'accidents', she learns that the building was built over one of the entrances to Hell.

Fulci traps everyone in his illogical, uncanny canvas of errant ideas and associations.

Even by Argento standards, Fulci's film is nonsensical to the point of distraction.

It's never clear what's happening, where the characters are running to, why corpses are hooked up to EKG machines and why "imaginary" characters are prone to the sufferings of the flesh.

I really believe that everyone who loves horror should see and experience this movie.

The very thesis here is that viewing life as more than a linear path from birth to death - no matter how joyous or sad - is just a more comfortable form of entropy. And what happens when even that system is erased? This is pure horror brilliance.

The masterpiece of the great Italian horror director Lucio Fulci.

While reviewers complain about dialogue and plot, Fulci does his best work in nauseous moods and textures

Lucio Fulci's undead epics, with their over-the-top depictions of graphic violence, fall squarely into this splatter category, or so it seems, at first. Actually, there is a little something more going on: a demented, despairing metaphysical speculation.

It can be amusing for those who love gore and fun special effects, but Fulci must have been completely stoned when he made this ridiculous movie that doesn't make any sense at all (who cares about plot, right?) and is only a bafflingly stupid mess full of awful performances.

"The Beyond" is a slightly plot-less, surrealist, and frightfully gory horror film that remains cult to this day, and for good reason. For a film that doesn't have much plot, and dives between characters without building them up to take the blows, there's a lot that remains memorable and entertaining about this Lucio Fulci classic. It deals with a lot of horror staples and expands on traditionally taboo topics such as extreme gore and killing innocent characters. The characters in this film are pretty forgettable and one dimensional in personality, though Emily the blind girl does stand out, not for her character, but what she means to the overall storyline. Little is explained in the film, as the director wanted, so it's not clear where Emily came from, what her connection is to the hotel, and why she is blind, but there are clues, scattered around the film that vaguely answer some of our questions. That and her dreadfully mangled eyes stand as a symbol for the rest of the film, gracing the movie poster as well as most film stills. The story remains fragmented because Fulci throws in a lot of different horror staples including haunted house, zombies, a doorway to hell, and gore upon gore. The zombies were added because the distributor noticed that there was a zombie trend at the time, similar to nowadays. Raising the dead via curse, and using a doorway to hell under the hotel was an interesting expansion of zombie lore up to that point, and further raises questions such as: Why do only some people get raised in the beginning but at the end all corpses rise? Why are people going blind? Does it have anything to do with the ending, which it seems to emulate? Not everything is cut and dry, and that's something horror films of today can learn from. Exposition is tirelessly thrown in to explain why things are happening nowadays. This film may be vague, but it lineated in plot and carefully imagined its visuals and gore. The gore scenes do stretch way too long in some instances, especially the tarantula scene, and the characters are no good, but everything else made this film a classic cult film.

I got pretty confused watching this movie, but maybe I should have tried to pay a little more attention or something. It seemed like a mystery, then a satanic movie, and then it turned into a zombie flick. There was a lot of good blood and gore, at least, that was the best part, it was really gross and mesmerizing. If you watch this, or have seen Fulci's other films, you know what I mean.

Most movie critics are going to tell you that the Beyond has a plot that makes no sense, that the acting is hit-and-miss, that this is wrong, and this and that. What they might not tell you is that the Beyond is one of the most effectively atmospheric horror movies ever made. The truly surreal nightmarish touch from good ol Fulci elevates this into another level. Many horror movies try way too hard these days, they should just come back to this one and study it again and again. This is how you do it, real horror doesn't need explanations, or even motivations. Just a strong sense of the innevitable, which is what The Beyond has.