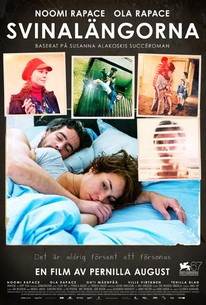 A family crisis forces a woman to examine parts of her life she'd prefer to forget in this drama from Sweden. Leena (Noomi Rapace) awakes on the morning of the Feast of St. Lucy to grim news -- her mother Aili (Outi Maenpaa) has been hospitalized and her condition is grave. While Leena tries to ignore the bad news, her husband Johan (Ola Rapace) insists that they visit Aili while they still can, and as the couple and their children make the journey South, Leena wrestles with the ugly memories of her childhood. Leena's parents were Finnish immigrants who never escaped the feeling they were outsiders in their new land, and her father treated his anxieties with alcohol. While Leena tried to escape the horrors of life at home by devoting herself to swimming and escaping to the house of a friend, Aili was forced to bear the brunt of his drunken violence, and decades later both still carry emotional scars. Svinalangorna (aka Beyond) marked the directorial debut of Pernilla August, one of Sweden's most respected actresses. ~ Mark Deming, Rovi

Critic Reviews for Svinalängorna (Beyond)

First time director Pernilla August takes a powerful, universal theme - alcoholism - and lets it be the catalyst for the drama; this is unsentimental and devastating work.

Audience Reviews for Svinalängorna (Beyond)

A poignant, tragic drama that explores the psychological consequences of a turbulent childhood marked by alcoholism - and it is incredibly sad to see good people allowing it to destroy the harmony in their family, causing such a profound emotional damage to all their lives.

Typical European family drama that deals with the effects upon a young girl of growing up with an alcoholic, abusive father. Rather heavy going with little relief. Interestingly the actress who plays the younger Noomi Raplace is the same one from the "Girl Who..." series and gets more screen time in this film that Noomi, who stars alongside her real-life husband, in the present day timeline of the story.