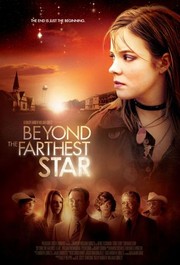 Beyond The Farthest Star

Beyond The Farthest Star Reviews

John B
½ December 22, 2018
good story overall, not quite what I expected, but, still interesting and teaches to pay attention to our loved ones and the trials each of us go through

January 5, 2018
Beyond the Farthest Star was without a doubt one the BEST FAITH-BASED movies I've ever seen in a long time. The movie was well written and well put together. The acting was just amazing and outstanding from everyone. Beyond the Farthest Star was wonderful, insightful, touching and heartwarming, had me on the edge of my seat from the beginning t the breathtaking ending. A must see movie! 5 stars!

Prepare yourself for all the "feelz." Bring tissues; mute all other electronics, and let the movie take you up, down, and through ALL the emotional loops. Again, be prepared. As with all the best stories, you'll most likely need a minute...or more by the end. Plan for that, too. While you're watching Beyond the Farthest Star for the first time, however, just try to take it all in. You'll have plenty of time to process and discuss it all later...and probably watch it again...and process even more.

Now, I love stories...in all mediums, but I'm usually the "book was better" type, so though I expected I'd love the movie, I didn't expect I'd LOVE the movie. I enjoy TV and movies as much as most, but it's rare when a movie can drive my thoughts and emotions THAT extensively. When folks say that Beyond the Farthest Star is unique and that it really touched their hearts...umm. Yeah. Believe 'em.

The cast, crew, and creatives flexed some pretty impressive emotional muscles on this one. When viewers say the movie tugged at their heart-strings and touched them deeply, they're trying to sum up a highly emotional experience in a tweet-sized bite. Just trust 'em. A short blurb can't do it justice. (Watch the movie, and you'll see what I mean.) I had to sit with it for a bit before attempting a review, too.

...and yes, I laughed as much as I cried, so don't think a heart-warming story has to be just a tear-jerker. Seriously...ALL the feelz. ...and I could recollect and discuss the movie for hours.

Discussion is good! Evoking deep thoughts and strong emotions is good! It's a really GOOD movie! ...but I may also prepare protective gear for some of those discussions. I don't particularly want to be squashed in the middle of a discussion between folks with "firmly" held opinions. Ever see Alabama and Auburn fans discuss the Iron Bowl? (((shudder))) Yeah. Be prepared for that, too. Emotions will run high! ...but what a ride?!?!

...and at the risk of waxing poetic for a moment... I really want to emphasize how powerfully Beyond the Farthest Star tells this story. ...stories, actually, but I'm doing my best to avoid spoilers.

I couldn't write a review right away. I had to sit with the experience for a bit. ...for a MOVIE. It's incredibly rare when I can't just start typing away, but it really was a "spontaneous overflow of powerful feelings/emotions...recollected in tranquility."

I have NEVER compared a movie to Wordsworth. Ever. ...but no movie has ever elicited the same experience, either. Until now. I didn't think that was possible! Theater? Maybe. ...but a movie? The writing alone warrants the reference. Truly, it's beautifully written, and I plan to start reading the novel tomorrow. ...but the TV/movie medium requires even more than beautiful writing to pull viewers IN to the experience and FEEL all the emotions. The cast, crew, and creatives reached skill level, magician on this one. (If they're listening/reading...DO IT AGAIN!)

So yeah. I tried to "blurbify" a description in just a few words, but my heart was reacting much louder than my brain. (...hence, the essay-length review) For the review title, however, I kept circling back to "insightful, inciteful, soul-soothing, and ultimately uplifting." If those are the applicable adjectives you like for your movies, I highly recommend Beyond the Farthest Star. If you really don't want to explore deep emotions and issues, you might prefer a light comedy or action/adventure instead. Humor, light or dark, is usually my first impulse, too, and there is light and dark humor in Beyond the Farthest Star...especially if you enjoy subtle references to the 80s or sci-fi. IF, however, you're looking to stretch your own emotional muscles, go with Beyond the Farthest Star. ...and a box of tissues. ...and be prepared to sit with the experience for a while afterward. You'll need the time for a "cool down stretch," but you'll be stretchin' the "smile" muscles, too.

Becka R
October 23, 2013
The best film ever out of Texas that I have seen and been blessed to be a part of! Have your rated this film yet? Do so today right here!

Debbie W
October 21, 2013
This movie was fantastic. The first faith based movie I've ever seen that had good acting (not cheesy) and the intertwined relationships were so true to life. This once famous preacher finds himself facing many obstacles as he tries to restore both his career as a preacher and his family. Kept me glued to my seat wanting to see what would happen next. Due to the topic content this is it not a movie I would take small children to see, but it is Fantastic for Jr. High through Adults audiences. A riveting example of how Satin works in our lives and how God can help us overcome.

Rob S
October 20, 2013
Beyond The Farthest Star is without doubt the best faith-based feature film I have ever experienced. I say "experienced" because merely "viewing" this film as a detached observer is next to impossible. This engaging drama simply offers so many points of connection with real-life people in real-life situations that only an entirely disinterested multitasking super-achiever using the film strictly as "background noise" could help but be affected in some meaningful way by this masterfully scripted, astutely casted, brilliantly performed, and profoundly impactful story.

Unlike most of its generic counterparts, BTFS is not overtly "preachy." Instead, it offers slices of life that have multiple points of contact with all audiences, all pointing in the direction of God. Its unsanitized peek into a particular family's world offers hope to lost and struggling souls and, at the same time, challenges Christians to personally apply the principles we (sometimes glibly!) proclaim.

Genie H
October 20, 2013
What a beautiful movie! I was completely absorbed in the film, lost in the story and the portrayal of the characters. I felt their struggle and pain, especially with the problems that were similar to those in my own life. I was distraught by the wrong decisions made by the characters, seeing the dramatic portrayal of the damage caused by secrets kept from those closest to you.

"Beyond the Farthest Star" is an incredibly well-made film. The quality of acting, writing, production, and musical score rivals many high-budget films. While I normally go to the theater to watch action movies (primarily for the special effects "eye candy"), I was completely absorbed and entertained by this film. I am incredibly proud and blessed to have see this in the theater.

Mark R
October 20, 2013
This movie is so well written and captured on camera!! It's not very often that I find myself still trying to sort out the ending with only 10 minutes of the film left. Andrew Librizzi skillfully takes the audience into the lives of the characters. I felt like a fly on the wall in someone's home. The raw emotion coupled to believable characters is a rare find in today's hyper-sexed, CGI world of surrealism theater.

Deborah C
October 20, 2013
An amazingly poignant story delivered in a masterfully artful medium. It is a must see for everyone in this world...a world that can be so bleak at times. It offers much needed hope in these days where, at times, there does not seem to be any. Go see it!!!!!!!!!!

Angel A
October 19, 2013
A touching story that you simply must see!

I have seen several faith-based films. In each case, I left the film feeling like I had just watched a made-for-TV movie or an after school special. As a result, I was a bit skeptical going in to see "Beyond the Farthest Star". While delivering a good message, this genre often "preaches" to the viewer, and in many cases seems to lack in quality acting, writing, direction, and production. I understand filmmakers for this genre are limited by budget, but I do not watch a film for its potential.

"Beyond the Farthest Star" has forever changed my expectations. With regard to writing, acting, production, cinematography, soundtrack, and score, this film can clearly hold its own up against any secular film. The plot was engaging and complex. The acting was not only believable, but also moving. No single actor stole the show, but rather the entire cast pulled equal weight. For a duration of the film, I was lost in a story and was quickly committed to the characters. This is a feat not easily accomplished in many mainstream films. The beautiful score was moving without being distracting. And lastly, while clearly touching on a faith-based message, "Beyond the Farthest Star" did not preach to the viewer. Frankly, I do not go to the cinema to be spiritually moved. I go to be entertained. It is my hope that potential viewers are not turned off from watching this film based on prior faith-based films. I am confident any non-believer or fan of dramas would equally enjoy this film. "Beyond the Farthest Star" is a refreshing change for faith-based films and has set a new standard for all dramas.
Page 1 of 1