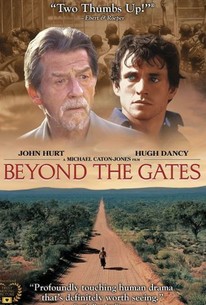 Critics Consensus: Complex, human characters and on-location shooting give Beyond the Gates palpable tension and urgency.

Critics Consensus: Complex, human characters and on-location shooting give Beyond the Gates palpable tension and urgency.

Critic Consensus: Complex, human characters and on-location shooting give Beyond the Gates palpable tension and urgency.

Beyond the Gates Photos

Two outsiders witness an onslaught of bloody Rwandan genocide in this fact-based drama from director Michael Caton-Jones (Scandal). In 1994, Joe Connor (Hugh Dancy) is a British schoolteacher who has volunteered to spend a year at the École Technique Officielle, a school in the Rwandan capital of Kigali. Connor's arrival in Rwanda occurs after the nation's Civil War between the Tutsis and the Hutus has dissipated (c. August 1993). Yet despite the official end of this well-publicized struggle, political negotiations between the two groups have reached a stalemate, and the Hutus begin systematic preparation for a mass-genocide of the Tutsi people (who have assumed political power via the establishment of the RPF). Connor has already seen signs of the coming conflict in the abuse meted out to Marie (Claire-Hope Ashitey), a Tutsi student who was one of his star pupils, as well as the bitter hatred expressed by François (David Gyasi), a Hutu janitor at the school. As the genocide erupts, with extreme Hutu factions slaughtering Tutsis by the thousands, the École Technique becomes a base of operations for Belgian peacekeeping forces from the United Nations. Most extended visitors from the West (especially America and Europe) flee Rwanda as the fighting breaks out, but Connor decides to stay, and in fact strikes up a friendship with Father Christopher (John Hurt), a Catholic priest who has come to the nation as a missionary. As Father Christopher serves mass and strives to offer solace to the Tutsis and moderate Hutus caught in the fighting, he and Connor use the school as a safe haven for Tutsi refugees; however, after five days of genocidal killing, the U.N. troops move out, leaving little hope for the people they were supposed to protect. Beyond the Gates was produced by David Belton, who helped write the film's story; Belton was a correspondent with the BBC who was assigned to Rwanda when the fighting broke out. ~ Mark Deming, Rovi

News & Interviews for Beyond the Gates

View All Beyond the Gates News

Critic Reviews for Beyond the Gates

This is a spiritual drama, not a political one, drawing a thick line between our good intentions and the selfish choices we ultimately make.

Though less reassuring and not as dramatically coherent as Hotel Rwanda, it still packs a hard punch.

The film grinds inexorably toward its unsurprising and terrible conclusion with infinite grace but no real suspense.

The sight of one character, a pleasant soul full of love and a lust for life I couldn't help but admire, suddenly brandishing a machete, his leg covered in blood and wearing a friendly smile made ice water run straight through my veins.

Movies about Africa often fall into this trap. Righteous indignation is the exclusive province of non-Africans.

There's little respite from the terrible history that this film retells just a determination (made stronger by the faces we see after the credits) to tell it, to be sure that history doesn't forget.

A more historically accurate, yet less cinematically satisfying look at the events that unfolded in Rwanda during 1994.

Beyond the Gates takes an unflinching look at the start of the Rwandan genocide.

It simply presents, and assumes that we have the inherent morality to understand that what we are watching is evil.

An intense and gripping drama that makes you realize that this page in Rwandan history deserves to be told more than once, lest history forget.

Make sure you sit through the credits to learn about the victims who survived and worked on this film ---- extraordinary!

The film chronicles man's inhumanity to man during the Rwandan genocide of 1994, (where) selflessness and selfishness stand side by side ----

Audience Reviews for Beyond the Gates

Thematically similar to Hotel Rwanda this movie about the genocide of 1994 presents an equally hopeless situation as the angry mob gathers outside a school, (only temporarily) protected by UN soldiers, who refuse to do anything more than their mandate tells them. As the situation gets more and more dire, like a noose closing around someone's neck, John Hurt and Hugh Dancy have their moments to shine, just like the whole cast is really convincing. While some Christian analogies are maybe a little over the top, the movie is still extremely thrilling, frustrating and sad. Showing pictures of the crew members who lost someone in the genocide before the end credits basically makes it impossible not to be touched by this really powerful and important film, that would have deserved as much attention as Hotel Rwanda.

[font=Century Gothic]It would be the easiest thing in the world to simply write off "Beyond the Gates" as another tearjerker but it has got more things on its mind than that.(A very unsentimental ending does raise it to another level.) In telling the story about two white Englishmen, Christopher(John Hurt, who is fantastic), a priest who intially believes the situation in Rwanda in 1994 to be no more serious than a coup, and Joe(Hugh Dancy), a neophyte teacher, who give sanctuary to thousands of Tutsi's during the resulting genocide, the movie covers a lot of the same ground that "Hotel Rwanda" and the documentary "Shake Hands with the Devil" have already covered, especially in the impossible situation that the United Nations troops were placed in, under orders not to fire their weapons. But the movie turns a mirror onto its own Eurocentrism. Joe gets Rachel(Nicola Walker), a reporter, to cover their situation by mentioning the Europeans there and later that same reporter confesses her own racism in covering similar atrocities in the Balkans. [/font] [font=Century Gothic][/font] [font=Century Gothic]All of which brings to mind the non-action that has been happening towards Darfur the last couple of years. Just as there is no difference between Hutu and Tutsi, there is no difference between black and white. We are all one people on this planet and must come to the aid of those in desperate straits no matter where they are.[/font]

Beyond the Gates Quotes