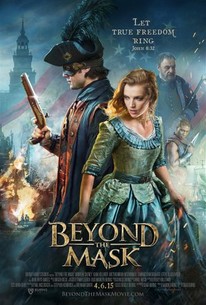 Beyond The Mask Videos

Beyond The Mask Photos

The chief mercenary for the British East India Company, being double crossed by his former employer, has made his way to the American Colonies. Working to redeem his name, William Reynolds (Andrew Cheney) now hides behind a different mask in hopes of thwarting his former employer. As his past life closes in on him, Will must somehow gain the trust and the help of his beloved Charlotte, a woman he has been lying to, as well as a colonial intellectual by the name of Ben Franklin. All the while he races against time to defuse a plot that could have devastating effect on the birth of a new nation. (C) Submarine

Critic Reviews for Beyond The Mask

A drama of redemption by way of an American Revolution history lesson, Chad Burns' action-adventure yarn offers little in the way of subtlety or surprise.

Works well because of a cohesive cast that seems to understand the mission and method behind the film.

The performances and visuals are so good, it's a bit disappointing the over-stuffed plot doesn't equal them.

laughable would-be epic is even more ridiculous than it sounds

It's just a good, fun movie.

Much more dire crimes have been committed against cinema.

This action film set against the months leading up to the Revolutionary War has the same strong visual effects, story and action sequences of films with 10 times the budget.

Wannabe Christian swashbuckler throws a lot of stuff up on the screen in the hopes that something will stick as exciting and romantic. None of it does.

The sort of action adventure a Born Again Quentin Tarantino might make.

Audience Reviews for Beyond The Mask

There are no featured audience reviews yet. Click the link below to see what others say about Beyond The Mask!

Beyond The Mask Quotes