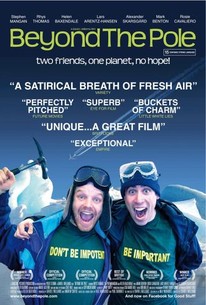 Beyond the Pole Photos

Two men with more ambition than sense set out to cross the arctic in this mock-documentary comedy. Mark Bark-Jones (Stephen Mangan) and Brian Tongue (Rhys Thomas) are a pair of environmental activists who've decided to take their own slogan "Don't Be Impotent, Be Important" to heart by staging an event that will attract attention to their campaign against global warming. Mark and Brian are determined to stage the first carbon-neutral journey to the North Pole, with the vegetarian hikers making the journey entirely under their own power and with only organically produced supplies. Mark and Brian know next to nothing about hiking through the frozen wastes, so it's fortunate that a filmmaker (Helen Baxendale) has decided to document their journey, and the cameraman she's hired, Steve (Clive Russell), has the know-how they lack. As the two hikers bumble their way across the snow and ice, with just one guy with a HAM radio (Mark Benton) serving as their support crew, they struggle to do their bit for the environment, through Mark seems to be just as interested in personal glory and their families are convinced they're crazy. Things only get worse when Mark and Brian discover another pair of "green" hikers from Norway are also making their way to the pole, and with greater speed. Beyond The Pole was an official selection at the 2010 Palm Beach International Film Festival. ~ Mark Deming, Rovi

Critic Reviews for Beyond the Pole

This is gummy (if welcome) eco-film satire, then, but mostly just a vehicle for tent and crampon gags, and for Mangan to perfect his grating-dolt shtick.

It is by turns a ferocious 'j'accuse' of the limits of liberal intervention and the myth of personal responsibility, underpinned by a surprisingly bitter current of darkness and despair.

With considerable experience in both comedy and genuine docus, helmer David L. Williams... knows exactly the filmmaking cliches he's spoofing, as well as the deadpan comic timing needed to stretch this over feature length.

It starts tiresomely - it is obvious the pair can't be taken seriously for a moment - but cheers up when the expedition gets dangerous and a couple of gay Norwegians show them a clean pair of heels.

The frequently improvised humour may be patchy, but this is a consistently enjoyable romp.

This is a small British mockumentary with some good laughs and two likeable leads in Mangan and Thomas, but you can't escape the feeling that it is best seen at home on DVD, with a nice takeaway.

This engaging comedy is consistently amusing rather than ferociously funny, but it has heart, ensuring an unexpectedly affecting climax.

Eschewing easy slapstick, director David L Williams finds humour in unexpected places. The Arctic has never been so much fun.

A likeable but giggle-free Brit comedy that brings nothing new to the ubiquitous mockumentary format, it succeeds only in gumming its targets instead of sinking its teeth into them.

Faintly absurd run-ins with polar bears and a rival expedition go as you'd expect, while the mockery of the men's unwitting hypocrisy plays second fiddle to the endearingly silly buddy act.

Watchable comedy with an engaging premise and strong performances but the script struggles to find the right tone and it's never quite as funny as it should have been.

Audience Reviews for Beyond the Pole

Quite fun but pretty lightweight in most ways, this should, perhaps, have gone straight to television and only the impressive locations ever make it feel any more than that.

Beyond the Pole Quotes